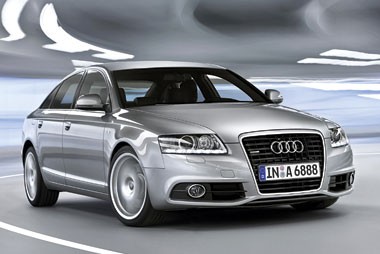 For what is being billed as a minor mid-life refresh on the surface, Audi has been very busy working under the skin of the new A6.

Apart from some new lights and a couple of bits of trim, there’s revised quattro four-wheel drive hardware which has been retuned for more dynamic driving, upgraded technology to host the third-generation MMI system, and a supercharged V6 petrol engine to bring better performance and more efficiency.

All of which is fine and dandy, but the real star of the new A6 range is the entry-level model – the 2.0 TDIe.

The small ‘e’ denotes it is an economy model, tuned for performance on the balance sheet and not on the road.

CO2 emissions drop from 159 to 139g/km, putting this Audi in a good position in terms of benefit-in-kind taxation and the new rules on capital allowances.

Aside from a slight retuning of the engine, the TDIe model also uses some hidden tweaks to make it more efficient.

For a start, it rides 20mm lower than other A6s which, combined with some aerodynamic tweaks, make the TDIe more slippery through the air.

Longer transmission ratios, an alternator which regenerates energy when the car is coasting, and a special power steering system complete the fuel saving theme.

None of which you notice when you’re driving along. Instead you sit in the superbly built cabin and make decent, comfortable progress while sipping fuel at a parsimonious rate.

Despite the A6’s size and weight, it is not hindered by having a 2.0-litre engine delivering just 136bhp.

In fact it feels fairly sprightly – or at least it does until you get in a BMW 520d and realise what a 2.0-litre diesel can offer (177bhp and better fuel economy/lower emissions).

The BMW is the exception though, rather than the norm.

In everyday driving conditions the A6 TDIe is a more than adequate companion.

The steering feel is light to the point of over-assistance, the six-speed manual gearbox shifts slickly, the ride quality is on the firm side but the pay-off is four-square handling in corners.

The A6 comes into its own on motorways and fast A-roads, where its planted feel and low-rev nature thanks to the taller gear ratios make it a very relaxing cruising companion.

On twistier roads the A6 suffers, and isn’t able to match the dynamic prowess of the 520d.

However, in every other respect Audi has caught up with its executive nemesis.

P11D PRICE
All the models are in SE specification, with the exception of the Mercedes-Benz which is a special edition aimed at the corporate market. It is cheaper than the entry Classic trim and comes with man-made ‘leather’ seats, satellite navigation and Bluetooth telephony.

EMISSIONS AND TAX RATES
The Audi puts its front-end price advantage to good use, resulting in a cheaper BIK tax bill. It will cost a 40% taxpayer £155 a month in company car tax, compared to a £164-a-month bill for the BMW. The Volvo will cost £169 a month and the E-Class £221 a month.

SMR COST
With 16-inch wheels, the Mercedes-Benz is the cheapest in SMR costs. The rest all have larger 17-inch wheels which means higher tyre costs. The German trio all have variable servicing intervals, which mean potentially fewer services than the set 18,000-mile service intervals on the Volvo.

WHOLELIFE COST
The Audi opens up a significant advantage, costing £1,000 less to run than the BMW over three years and 60,000 miles – it is competitive on fuel costs and puts in a class-leading performance in terms of retaining value. The Mercedes-Benz is well off the pace in this sector.

The Mercedes-Benz is the first to be discounted.

Despite being a special model tailored for corporate buyers, it is outclassed in both running costs and driver benefit-in-kind taxation levels.

The Volvo also goes, but it puts up a far better fight than the E-Class.

At this level, the Volvo badge still hasn’t quite got the cachet of the German marques, which drivers in this country love.

So it comes down, as is the norm, to a straight fight between Audi and BMW.

The A6 offers drivers the lowest benefit-in-kind bills and is also the cheapest for a company to run.

Despite not being able to rise to the dynamic challenge of the BMW, the Audi’s cost proposition wins through.