WITH sales trebling in the past decade, Audi’s success is attributable to a popular and wide-ranging model mix.

Topping the range is the A8, Audi’s technological flagship with its aluminium spaceframe construction. Audi boasts the A8’s body is 41% lighter than steel-bodied rivals, benefiting fuel economy and emissions, yet is also the most rigid.

If that’s news to you then it seems you’re unlikely to fit into Audi’s profile of a typical A8 customer. The company says A8 buyers are very well informed individuals with their ‘own resources’ who are discerning in their choice of luxury car. While that may be true for 66% of A8 buyers in 2004, the remaining 34% of A8s were bought with company money. 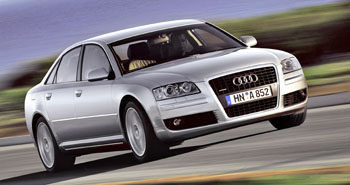 Year-to-date, the fleet sales figure currently stands at 32%, which is likely to be boosted with the launch of the facelifted models. This sees all A8s adopt the prominent framed grille previously only seen on the range-topping 6.0-litre W12 model.

Along with the new look comes the adoption of a new standard SE specification and the availability of cornering light technology, optional ceramic brakes which last for four times the life of conventional steel discs, a digital radio and a new Bang & Olufsen stereo system.

Revisions to the engine range include the new entry-level 3.2-litre FSI V6 petrol in place of the 3.0-litre engine and a new 4.2-litre V8 TDI to replace the 4.0-litre version.

The two new engines enter at entirely different points in the price spectrum. The currently front-wheel drive-only (quattro models will be available in the future) 3.2-litre V6 SE represents an entry point to the range at £47,930, or £51,300 for the long wheelbase version, and the 4.2-litre V8 TDI quattro is available from £58,605 or £61,975 for normal and long wheelbase respectively.

The 3.2-litre’s pricing represents a saving of around £1,000 compared to its direct BMW and Jaguar rivals, and a significant saving over the Mercedes-Benz S350.

Of the new engines, the 3.2-litre petrol is one fleet buyers are more likely to gravitate to. With CO2 emissions of 238g/km and combined fuel consumption of 28.8mpg it betters its key rivals on both counts.

With the 4.2 V8 TDI you get a combined consumption figure of 30mpg and a CO2 emissions of 258g/km, which is high compared to six-cylinder rivals, but given the large performance advantage it offers that’s hardly surprising.

However, the A8 4.2 V8 TDI offers buyers who might more usually opt for a fuel-guzzling 12-cylinder petrol engine a genuine alternative.

Combined with its quattro four-wheel-drive system, Audi’s big saloon is able to exploit that abundant power extremely well, reaching 62mph from a standstill in just 5.9 seconds. Its six-speed Tiptronic automatic gearbox shifts smoothly, whether you choose to do so via the steering wheel-mounted paddles or leave it to its own devices.

After the relentless surge of the V8 TDI, the 260bhp 3.2-litre V6 seemed slow in comparison. It isn’t though, with a 0-62mph time of 7.7 seconds and plentiful mid-range acceleration. Both models exhibited remarkable refinement at high speed cruising on Germany’s autobahns.

The 3.2-litre FSI comes fitted with Audi’s Multitronic CVT (Continuously Variable Transmission) gearbox but it lacks the slickness of the conventional automatic in the TDI.

The 3.2 FSI is front-wheel drive only, but you’re unlikely to notice the loss of two driven wheels unless you’re harsh with the throttle and switch off the traction control. It’s unlikely you’ll do so. Despite Audi claiming the A8 will appeal to enthusiastic drivers it’s a car better enjoyed for its cruising rather than sporting ability.

Ask the A8 to drive with the verve of a BMW 7-series and it simply doesn’t deliver, the suspension unable to match the BMW for bump absorption or fluidity, the A8’s steering feel also lacking the kind of feedback offered by the Seven.

Instead, enjoy the easy power delivery of both new engines and soak up one of the best interiors around – Audi is unsurpassed among its premium rivals for interior ambience, build quality and ease of operation.

Even its MMI (Multi Media Interface) system, which controls the A8’s numerous car and entertainment controls, is easy to use.

WITH the same high level of comfort as before, but with better equipment levels and two impressive new engines, the A8 is a strong competitor in the luxury saloon market. However, adopting the bold new grille across the range might turn off some buyers who were previously attracted by the A8’s understated style. 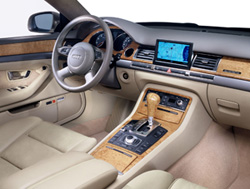