LITTLE, it seems, can slow the meteoric growth in SUV sales in the UK. Despite mounting fears over global warming, fuel prices the wrong side of £1 a litre and a growing anti-4x4 lobby, the segment is the fastest growing of all.

Until now, Audi has been conspicuous by its absence, with only the A6 allroad in its stable to give it a leg up in this crucial sector.

But now, with the Q7, at last it has a luxury full-size SUV to compete with the best in class. And despite its late arrival at the party, more than 1,300 customers have placed deposits, giving the Q7 a healthy-looking future.

Two engines are on offer, both mated to a Tiptronic automatic transmission: the 4.2-litre V8 uses Audi’s FSI fuel injection technology to deliver its 345bhp, while the 3.0-litre V6 TDI offers 230bhp. With some 75% of purchasers in the sector opting for diesel power, it’s not difficult to predict which will be the top seller.

With prices starting at £37,330 OTR for the entry-level 3.0 TDI and rising to £48,625 for the 4.2 V8 S line, the Q7 is right in contention with the likes of the Mercedes-Benz ML, BMW X5, Porsche Cayenne and Range Rover Sport at entry but some way away from the cheapest Range Rover which starts at over £46,000.

That said, the Q7 matches the Range Rover on size: at more than five metres long and nearly two metres wide, this is one big car. 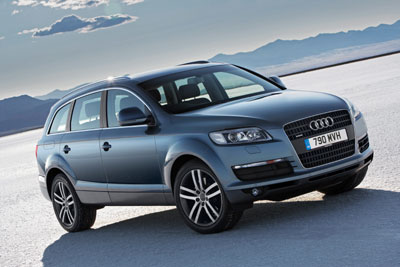 All Q7s offer tantalising equipment as standard: seven seats on all models, adaptive air suspension, 18in alloys and quattro four-wheel drive, while the cost to upgrade to SE and S line specification is relatively modest.

An extra £2,500 over the price of the standard 3.0 TDI gets you SE trim (included on the V8) with leather upholstery, electric front seats, contrasting bumpers and chrome detailing on the roof rails and trim strips.

The air suspension has five settings, the most popular of which are likely to be ‘Comfort’ (optimised for comfortable cruising), ‘Dynamic’ for a more sporting feel and ‘High’ which gives 205mm ground clearance for cross-country driving.

New technology abounds in the Q7, such as the optional Side Assist, which uses radar sensing for lane-changing manoeuvres, and a camera-assisted rear parking device.

At this level, running costs are a bit of an irrelevance – 72% of Q7 buyers are predicted to be private buyers according to Audi – though CAP Monitor predicts a best-in-class RV of no less than 51% of cost new over three years/60,000 miles, comparing strongly with the BMW X5 3.0d’s 49%.

Total running costs are predicted to be under 50 pence per mile over the same operating cycle according to CAP – competitive in the class.

THOUGH the 4.2-litre V8 is smooth and sounds delicious, the downside is a depressing thirst: the handbook says it’ll do 20.8mpg on the combined cycle but in reality that’s going to be well into the teens in normal driving.

Far better to opt for the excellent 3.0-litre TDI which also sounds great and offers vast mid-range urge. With 369lb-ft of torque from just 1,750rpm, peak torque beats the V8’s 325lb-ft at 3,500rpm. It shows in more settled give-and-take driving which has the V8 hunting through the gearbox for the ideal gear. And you get improved fuel consumption of nearly 27mpg combined.

Inside, there’s a sense of déjà vu if you are familiar with Audi interiors. The dash bears more than a passing resemblance to the latest A6’s hewn-from-solid fascia. The Q7’s layout is very similar, with the same high centre console, gear selector and instrument layout.

Curiously, though, whereas the A6 has an excellent electro-mechanical handbrake, the Q7 makes do with a foot-operated pedal and clunky manual release lever: it jars somewhat with the high-tech feel of the interior.

Otherwise the interior is standard Audi fare – fantastic design, appearance, build and materials, and exemplary finish – though it doesn’t actually feel that spacious. An A6 Avant seems like it runs it close.

The penalty of the seven-seat configuration is a high boot floor; together with the Q7’s sweeping roofline, it makes the tailgate opening seem small.

But on the road, the Q7 is impressive. Though the air suspension offers choice in its settings, it doesn’t seem to make a lot of difference to the driving experience if you choose ‘Comfort’ or ‘Dynamic’. In either mode, the ride is firm but the handling is correspondingly taut, and the Q7 seems much smaller behind the wheel than its bulk suggests.

Refinement is another strength with the merest flutter of wind rush from the screen and well-muted engine noise.

It’s unlikely any Q7 would be used extensively off-road, but suitable tyres and extra underbody protection is available as an option for those who want to plunge into the undergrowth.

THE Q7 is good to drive and, if not exactly pretty, then certainly understated in its looks which should appeal to existing Audi buyers and new customers alike. The Q7 is comparatively well priced, too. With such buoyancy in the sector and an order book stuffed with deposits, can Audi really fail?