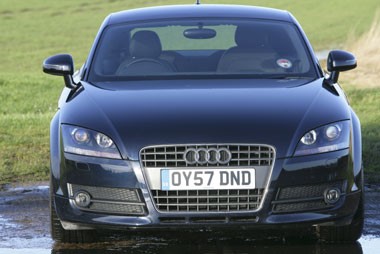 As a way to start a weekend, having a big Dutch trucker go up your backside isn’t ideal.

But that was the fate that befell our TT a couple of weeks ago.

A colleague was waiting to join a roundabout when an articulated lorry crashed into the back of him.

The driver’s excuse was that he was looking elsewhere and hadn’t seen the diminutive TT sat on the road.

The timing of the crash couldn’t have been more topical, what with recent figures suggesting that road incidents involving foreign drivers have risen by 47% since 2001.

Looking on the bright side, however, the damage to the Audi wasn’t as bad as the initial ‘truck rear-ends TT’ thoughts suggested.

The rear bumper was slightly grazed, but the tailgate was twisted enough to make it difficult to close properly.

The end result was a new bumper and tailgate which, including fitting, cost just over £1,500.

The car was off the road for just over a week – longer than the initial three-day estimate due to a delay in a part arriving.

Once delivered back to the office, the TT looked as new, with its metallic blue paintwork gleaming in the sun.

With the wheels also benefitting from a full valet, a few parking scrapes were suddenly a lot more visible.

The optional multi-spoke 18-inch alloys on our TT certainly look good (much better than the standards 17s which give the car an undershod appearance), but they have a pronounced ridge which is quite susceptible to kerbing.

Of course, I could always learn to park better.

The bodyshop valet also revealed how prone the front of the car is to stone chips – there are three quite substantial chips on the bonnet now.

I guess it’s the price you pay for having a low-slung car.

Other than the crash, life with the TT is still very enjoyable and, surprisingly, frugal.

Fuel economy is hovering around the 31mpg mark.

Some long motorway runs have undoubtedly helped economy, but even hard cross-country runs rarely see the figure drop below 24mpg.

OK, so low 30s is not that impressive in the grand scheme of things, but it’s not bad for a 200bhp sports coupé.

The TT also performs well on the balance sheet, and there are few cars on sale which will retain 51% of their cost new after three years/60,000 miles.

This results in wholelife costs of around 39 pence per mile over the same period – about the same as for a top-spec petrol Mondeo.

For user-choosers, the TT as an all-round package is a very tempting one.

And now there’s even more TT choice with the impending arrival of a higher-power TTS or, more importantly, the 170bhp diesel TT – sleek styling and 50-plus mpg sounds a dream ticket.