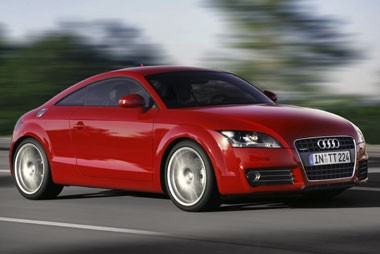 The TT has always been a fine corporate trinket, ranking alongside a Blackberry and those little metal balls that clang together as evidence of sophisticated, successful enterprise.

It’s got something to do with its very metallic, architectural nature – not far off a showy sculpture you might find in the reception of a multi-national’s glassy skyscraper.

And sales in the business market reflect this, too. Last year, nearly 3,000 TTs found their way on to fleets, and that’s discounting all the others bought on cash-for-car schemes.

Those figures are set to swell further with the introduction of a diesel version, which uses the popular 170bhp 2.0-litre engine found in all those Golfs, A3s, A4s and Passats.

It’s one of the staple engines of the user-chooser market.

While some will mutter about sporty cars like the TT being powered by diesel, it was only a matter of time really.

You don’t throw all that money at diesel-powered Le Mans cars without maxing its effect to the hilt.

Plus, under that confident metal rainbow of a body, there lurks the mechanics that mean a business driver could happily rack up tens of thousands of miles without any trouble at all.

This is sporty driving without the usual compromises of petulance, expense and discomfort.

For a fleet manager that means the TT is really a no-brainer on choice lists.

Alongside the well-proven machinery, you’ll be getting fuel economy of 50mpg and very high residual values.

A standard 2.0 TFSI petrol TT performs incredibly well, holding on to half of its value after three years/60,000 miles, and a diesel should perform the same, if not slightly better, according to CAP.

In terms of spec, the TT TDI in both Coupe and Roadster guises only comes with quattro four-wheel drive at the moment, which some might find slightly odd if you’re of the opinion diesel should be offered in the most parsimonious set-up.

A front-wheel-drive-only version would further save fuel, but at launch it wouldn’t have sounded as committed to a sporty driving experience, so the marketers have won a solid argument over the accountants this time.

This means that it is worth bearing in mind that the TT TDI is not quite the default diesel option that many drivers have been suckered into with other cars over the past few years.

To claw back the extra £1,100 the entry quattro diesel costs over the entry front-wheel drive petrol, a driver will have to do 40–50,000 miles over three years, although that figure would drop considerably if they opt for the equivalent TSI quattro, which is the same price at £26,350.

As for tax, at 139g/km of CO2 for the Coupe, it performs very well in the 18% benefit-in-kind tax bracket, while the entry petrol model has 183g/km, meaning that for a company car driver doing 60,000 miles over three years it really is the intelligent option financially.

That means that of the 4,000 units Audi reckons it will sell every year, almost all will be business purchases of one form or another.

There’s no reason for low mileage private buyers to pick one but there are plenty of reasons for business users replete with BlackBerry and clangy metal ball thingies.

But what about its more subjective offering?

It’s all well and good being economic, but what about the joy and pride of ownership which is essential to the TT offering?

Fortunately, Audi has this covered.

This is the best sounding diesel money can buy.

The new TT is blessed with excellent acoustics anyway, and somehow Audi has managed to produce a diesel noise that you actually want to listen to.

It’s still no smooth petrol but has enough of a hard rasp to sound suitably sporty.

And on top of that, it feels wonderfully revvy, with the needle swinging round to 5,000rpm with enthusiasm.

While it still has the workmanlike low-down grunt, at the top end this engine seems to be enjoying itself rather than barking in pain like many diesels.

And there’s performance there, too: 0-62mph is achieved in 7.5 seconds and with the optional S tronic semi-automatic gearbox fitted to our test car it accelerates quickly and without cease. It’s not quick quick, but it is still pretty sprightly.

The Volkswagen Group diesel engine seems to have been given a whole new lease of life in the TT TDI, and the financials stack up too, making the already desirable TT brand even more alluring.

The range-topping TTS provides easy thrills in a beautiful package, but its appeal in the corporate market is overshadowed by the diesel.

Launched at the same time as the TT TDI was the TTS. A hot version of the old and new TT has always been the gaping hole in the range – one of Audi’s most desirable cars without one of its most desirable badges was odd.

The 272bhp TTS uses an uprated version of the turbocharged 2.0 TFSI engine from the S3 alongside quattro four-wheel drive, high-tech Magnetic Ride damping and an optional S tronic transmission for the full Play-Station experience.

Costing from £33,390 for the Coupe, the TTS tops the range and provides some serious pose value.

At this price, it will be up against cars like the Porsche Boxster and Cayman, BMW Z4 and newly-fettled Mercedes-Benz SLK, and in performance terms it doesn’t disappoint, with a 0-62mph time of 5.6 seconds, at the top end of a very fast class.

What a lovely place to be: flat-bottomed steering wheel, an interior of astounding quality and attention to detail and firm supportive seats.

Perhaps they could have dropped a little lower, though.

On the move the engine sounds nicer and feels much less stressed than it does in the S3, and with the S tronic transmission you get an evocative plarpy noise on the upshifts.

All you need to do is sit back and let it do the work for you. Combine that with huge levels of grip and Magnetic Ride adaptive suspension and going fast is easy.