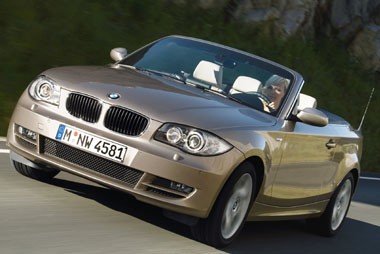 With few executive compact convertibles on the market, BMW has good reason for feeling confident about the prospects of its new 1 Series Convertible.

The roof opens or closes in 22 seconds – which is tardy compared to the nine seconds taken by its deadly rival, the Audi A3 Cabriolet – but you can carry out the operation at speeds of up to 31mph, compared to only 19mph in the Audi.

And while the Audi’s Z-fold roof makes the car look a little unfinished when open, the BMW’s fully automatic one is concealed elegantly under a flat tonneau.

The soft-top convertible is about 120kg heavier than the coupé it’s based on due to the extra strengthening needed to compensate for the absence of a roof, but a metal roof would have come close to doubling that. BMW’s trademark 50:50 front-rear weight distribution remains, along with rear-wheel drive, for balanced cornering behaviour.

If you choose leather upholstery, you get clever sun-reflective technology which is claimed to reduce the chances of a scorched back if you have left the car parked open in the sun because it reduces the seat surface temperature by 20C.

“Fleet customers used to be against them,” says Ollie Parsons, product manager for
1 Series.

“But people have got used to convertibles with metal roofs on fleets and we think it would now be difficult to tell an employee they couldn’t have a car because it was a convertible but with a soft-top.”

Despite the 125i badge there’s a smooth 215bhp 3.0-litre six-cylinder engine under the bonnet.

With a slick six-speed manual gearbox, the 125i SE is a great way to travel briskly or just waft along, roof down.

BMW’s fuel-saving EfficientDynamics package leads to an official 34.9mpg on the combined cycle though after some spirited driving we managed only 24.4mpg.

Despite its extra weight, the car is rapid and, though running on 17-inch wheels and runflat tyres, the ride was comfortable even over poor surfaces.

The car is set up for predictable handling rather than leery tail out stuff.

Though billed a four-seater, you would need to be small to get comfortable in the back.

Well made and entertaining to drive, the Convertible is snug with the roof up but with the roof down you really need the optional wind deflector (£220) to be comfortable.

The Convertible is yet another worthy addition to BMW’s growing 1 Series family, and the coveted EfficientDynamics fuel saving technology brings down emissions and fuel use.