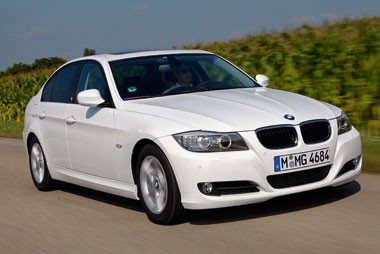 By engineering a new version of its core 320d saloon below the key 110g/km of CO2 level, BMW has set the bar to a new level (in this case low, rather than high).

What appears to be a conventional diesel 3 Series hides some engineering advances which make this model – the 320d EfficientDynamics Saloon, to give it its full name – a massive step forward over its stablemates.

Naturally, the new model comes with the full suite of EfficientDynamics technology (low rolling resistance tyres, stop-start, gearshift indicator, lower ride height), but BMW has re-engineered the flywheel so that it vibrates less, eliminating that stuttering when diesels are out of the torque band.

As a result, the new 320d is much smoother at lower revs, meaning drivers are more inclined to stay in a higher gear, improving fuel economy.

And it really works, the engine pulling smoothly from low speed in high gears.

While BMW engineers say that they have had to compromise the driving dynamics of the 320d slightly to get down to 109g/km, in real-world driving it feels little different to the regular 320d model.

The greatest compliment you can pay this new BMW is that it feels very similar to the current ‘full fat’ 320d.

The benefits for outright purchase fleets with the full writing down allowances will make it a key model for BMW in the corporate arena, and driver BIK will be very low for a sporting executive saloon.

BMW has set a new standard for the rest.