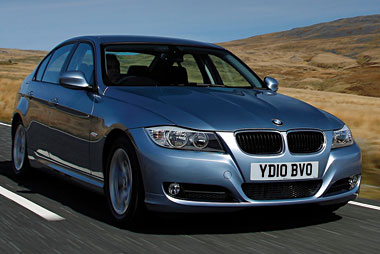 It’s almost three years since BMW began rolling out its EfficientDynamics fuel-saving technology on all its cars.

During that time, its main rivals have made progress in trying to match BMW’s achievement of balancing performance with strong fuel economy and low CO2 emissions.

BMW has now launched its lowest ever CO2 model, and the good news for driving enthusiasts is that there doesn’t seem to be any compromise on performance or equipment.

The 320d EfficientDynamics (ED) saloon is based on the 320d SE (with its automatic stop/start system and energy recuperation technology) and although it may be slightly down on power compared with the standard car, 163bhp is not to be sniffed at, while maximum torque of 280lb-ft is identical to the standard version.

The 0-62mph dash is covered in just eight seconds and the car has a maximum speed of 142mph.

BMW says it’s the first car in its class – and certainly with this level of performance – to dip below the threshold for a 100% first year write-down allowance.

Its CO2 emissions are 109g/km and its fuel consumption figure on the combined cycle is 68.9mpg.

These figures would have been exceptional from a small diesel just five years ago, but to achieve it in a powerful premium saloon moves the game on significantly.

It’s worth pointing out that the 320d launched in 2005 has an identical power output but was capable only of 153g/km and its official fuel economy was almost 20mpg lower – both respectable at the time.

It’s difficult to tell the ED saloon apart from the SE. It stands on 16-inch alloy wheels rather than 17-inch versions (which arguably results in improved ride comfort for the more efficient model, given that they are EnergySaver tyres and not run-flats, too) and its suspension is 15mm lower.

Apart from upgrading the alloy wheels, a near-full range of 3-Series options is also available.

The ED saloon has new technology which helps prevent the engine labouring at lower revs to allow the car to be driven smoothly at a much lower engine speed than the standard model, which also helps save fuel.

The gearshift change-up indicator is able to recommend changes earlier, and the car is also quieter because of its lower revs.

As a result of the car’s strong performance, BMW does not see the specialised low-CO2 versions of rival products such as the Audi A4 2.0 TDIe as competition.

However, it has a huge advantage over rival Audi and Mercedes-Benz products with similar performance – none of which can improve on 127g/km and would be subject to benefit-in-kind tax at 18% instead of 13%.

On the road, the car feels every bit a 3 Series.

There’s no indication this is the most economical car in the BMW range apart from the astonishingly high mpg figures shown on the trip computer.

Our test route, which included a variety of roads but little motorway cruising, suggested the car achieved close to 60mpg. It shouldn’t be too difficult to reach well over 60mpg on longer runs.

It’s very quiet on the road and although the tyres might not have the outright grip of a version with larger wheels, the lowered suspension helps make the 320d ED feel very nimble on country lanes.

The 320d ED is an example of all BMW can currently achieve to save fuel and cut emissions without compromising performance.

Forget the turbo-charged 3.0-litre petrol and diesel engines, this car is BMW’s most impressive achievement.