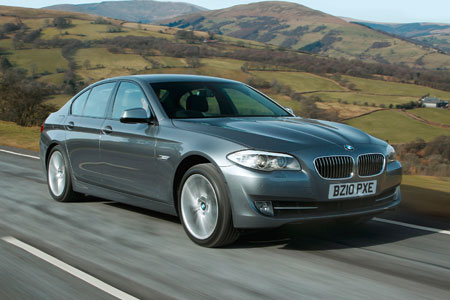 BMW’s achievements in improving the fuel consumption of its vehicles and reducing their CO2 is well documented.

But in the five years since the first EfficientDynamics models were introduced, other manufacturers have caught up, and talking to some of the engineers at car manufacturers, there are certain benchmarks that they believe are at the limit of conventional technology.

When BMW launched the EfficientDynamics saloon version of the previous 3 Series, the 320d ED achieved a remarkable 109g/km and 68.9mpg using a 163bhp 2.0-litre diesel engine and six-speed manual gearbox.

Now, the next-generation 3 Series has arrived and there’s a 320d ED variant from launch, but CO2 emissions have hit a brick wall at 109g/km, although improvements in transmission technology have allowed the optional automatic gearbox to achieve the same CO2 emissions and fuel consumption as the manual.

When BMW launched the 520d in August 2010, its headline figures of 58.7mpg and 129g/km with its 184bhp engine might have seemed impressive enough, but little more than a year later, the 520d was to undergo the ED treatment to achieve 119g/km and 62.8mpg. This gives it a significant advantage over the lowest benchmark set by rivals – which was actually equal to the standard 520d.

But unlike the 320d ED saloon, the 520d is currently only available with a manual gearbox. That isn’t a criticism – BMW’s manual gearboxes are pretty good. It’s just that the market for executive saloons is dominated by automatics, so while it’s still class leading, it’s within a niche.

BMW isn’t expecting the 520d EfficientDynamics to take as high a proportion of sales as the 320d equivalent in its range.

Shifting gears yourself in a car like this isn’t all bad, and it isn’t difficult to see why the 5 Series has again thrust itself to the top of its class as executive saloon of choice.

Its engine is both refined and responsive, and despite essentially being the least performance-oriented 5 Series, there’s no real indication that it’s an economy model from how it drives.

One of the displays below the instruments shows information relating to Eco Pro mode. A feature calculated how many miles are recaptured through the car’s regenerative braking technology, and I was surprised to see more than 20 miles scavenged back by the time half a tank of diesel was used.

Priced at £30,495 on the road it comes with standard leather seats, Bluetooth and a range of equipment that has become an essential standard in executive cars.