IT is very much a case of spot the difference with this new 5 Series. At first glance it seems BMW is happy with its executive saloon’s styling, and changed nothing.

But look really, really closely and you might notice the slightly revised bumper and clear glass head and rear lamp units with a touch of chrome inside. There’s also a feature line along the flanks at the side sill level.

Not that you’d see them unless someone pointed them out to you, or your name is Chris Bangle – the controversial head of design at BMW.

That’s not really such a bad thing. After all, last year saw BMW sell a record 19,606 5 Series in the UK – with around 55% bought with company money. Last year, the 5 Series represented 17% of BMW’s 115,616 sales in the UK and, unsurprisngly given the number of fleet buyers, diesel was a popular choice. Some 13,000-plus were diesels, with a 6,600 of them being the entry-level 520d.So it seems we’ve now warmed to its looks, after being shocked when it was unveiled in 2003. 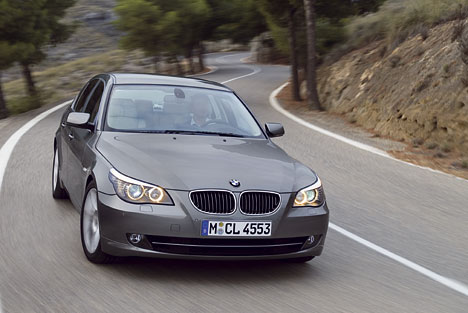 So if the styling hasn’t changed much, what has? There’s a new interior, but the changes here are as subtle as they are outside.

You might feel them though, as the trim materials are a better quality and the iDrive controller has gained some additional buttons for increased user-friendliness – a key criticism of the old car. Otherwise, it’s pretty much the same comfortable, spacious and refined interior that it ever was.

The real changes are in the unseen technical areas. There’s a new automatic gearbox in the most powerful petrol-engined versions that offers improved economy over its manual counterpart – useful when up to 75% of 5 Series drivers prefer to have their gears changed for them.

That new six-speed auto is operated by an electronic lever sprouting from the transmission tunnel. It doesn’t offer the range of movement of a traditional automatic selector. Instead of the lever’s position denoting your choice of gear it is highlighted by an illuminated panel on the shifter knob itself.

It’s quicker to change gear and, as ever, there’s the opportunity to take control either by using the central selector itself or wheel-mounted paddles.

Like its 1 Series relative, the 5 majors on BMW’s new concept of Efficient Dynamics. Its nine engines have all been tweaked to produce more power with fewer emissions, without sacrificing any of the performance that buyers in this market expect.

As a further nod to economical motoring there’s a gearshift indicator that suggests to the driver via a tiny display in the instrument cluster the most efficient gear choice.

More importantly in the quest for energy saving is the introduction of Brake Energy Regeneration, of the sort you might expect in a hybrid car. Unlike a hybrid, though, the 5 Series doesn’t have a supplementary battery pack and electric motor.

Instead, the energy retrieved on engine overrun and while braking is utilised to operate electrical motors for various other systems such as power steering – reducing the need for the engine to supply such power.

These changes, combined with second-generation direct gasoline injection, allow the 530i petrol to return 36.7mpg and 182g/km on the combined cycle. This compares very favourably with its predecessor’s 32.1mpg and 212g/ km – dropping it by six benefit-in-kind tax bands. Similar reductions in emissions and consumption are obvious across the range in both diesel and petrol versions.

Obviously, with the introduction of a revised model BMW has increased the available equipment, with new features like a vibrating steering wheel lane change warning system, that faster-shifting auto transmission, stop-and-go Active Cruise Control and a USB socket for connecting MP3 players among the list of extras.

FIRST impressions of the revised 5 Series are that it is much like the outgoing car. So much so that BMW laid on some ‘old’ cars to highlight the differences more effectively.

Both old and new models were the excellent 3.0-litre straight-six petrol. Second-generation direct injection has helped increase power by 14bhp to 272bhp, while also reducing emissions and consumption. Fitted with either a slick six-speed manual, or BMW’s new Automatic Sports Transmission, the new six-speed auto is significantly faster when shifting through the ratios than its predecessor.

The most obvious difference in the cabin are the additional buttons on the centre console allowing you to programme radio channels, sat-nav settings and other functions for direct access to the iDrive.

The 5’s dynamic performance has rarely been questioned, so BMW has left largely alone. The ride remains decent on sensible wheel sizes, while the steering is well weighted and better without the optional Active Steering.

Overall, the 5 Series still excels, bettering all rivals for its ability to combine long-legged cruising comfort and enjoyable dynamics when the route becomes more interesting.

INSIDE and out the 5 Series looks little different, though the materials and equipment levels have been enhanced. The chief improvements are the revisions to the engines to increase power while also significantly reducing emissions and consumption – good news for fleet drivers.