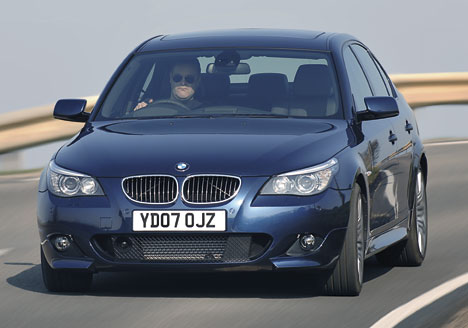 This BMW 520d is a hard car to get your head around.

For a start, you might ask why anyone would choose a bog-standard 5 Series with fewer toys than Oliver Twist when you could get a similarly-priced 3 Series replete with powerful engine and all manner of luxurious goodies?

But sales figures show the 520d is a very popular car.

In 2006, it was the range’s most popular model – and one of BMW’s best-selling fleet cars.

Obviously, one of the 5 Series’ attractions is that it is a much bigger car than the cosy 3 Series, and affords the driver a little more stature.

But for all its size, the 520d punches well below its weight – at least in environmental terms. Because effectively, you are driving around in a supermini.

The 520d saloon has claimed combined fuel economy of 55.4mpg with CO2 emissions of 136g/km, putting it in the lowest possible benefit-in-kind tax band.

Just how stunning are these numbers? Well, a Volkswagen Polo 1.9 TDI or a petrol-engined smart fortwo can offer only very slightly better figures.

This is thanks to the EfficientDynamics technology now available across most of the BMW range, although in the 520d you don’t get stop-start for some unexplained reason.

However, it is likely to feature at a later date.

It does come with gearshift indicator, low rolling resistance tyres and active aerodynamics which uses flaps that close in the grille and air vents at speed to make the car more slippery.

So the real cleverness is that you don’t really pay in performance terms for the low emissions and excellent fuel economy.

It might have supermini emission figures but it performs like a grown-up car. This engine produces 177bhp – about the same as Audi manages to extract from its 2.7-litre TDI unit, albeit the BMW has slightly less torque.

It’s still an impressive result, though, and means the 520d manages performance figures of zero to 62mph in 8.3 seconds.

It’s adequately fast and from behind the wheel you wouldn’t feel especially short-changed for picking the range’s smallest engine.

Despite being a four-cylinder in a car more often known for a six, it’s decently refined and quiet too.

It’s hard to fault as a powerplant and plenty of passengers wouldn’t be able to tell they weren’t in something more salubrious.

Where it starts to fall down is in the specification. Our test car had seats that were clothed in the sort of austere beige cloth of a 1970s railway station waiting room seat and they were hard, flat and not especially comfortable either.

The equipment list includes automatic air conditioning, a CD player and little else, but there is at least a quality atmosphere to the cabin as BMW has improved the standard of plastics, which previously looked a little cheap in some areas. So it’s solid, but most definitely unspectacular. 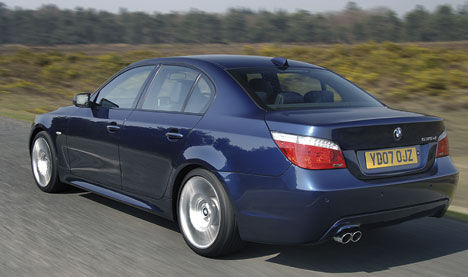