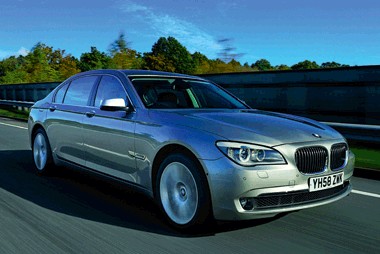 There is an array of advanced and powerful engines which can be fitted to the new 7 Series but, in reality, BMW should have saved some money and simply offered one.

Despite the aural and visceral delights of the six and eight-cylinder petrol units in the 740i and 750i, the vast majority of buyers will opt for the 3.0-litre straight-six diesel. And with good reason, because it brings running costs down to an almost palatable level for a luxury saloon.

So what will the 85%-plus of 7 Series buyers get from the 730d? Stunning refinement, great space, far less controversial looks and, with the arrival this month of the long-wheelbase version for the burgeoning chauffeur fleet market, a choice of models.

As is usual with a new BMW model, EfficientDynamics trickery has been employed to raise power, increase fuel economy and lower emissions.

Thanks to extensive use of lightweight aluminium panels, brake energy regeneration and optimised operation of systems such as the air conditioning, the new 730d delivers 245bhp (up 14bhp on the old model), yet improves economy and emissions by 10% – BMW claims 39.2mpg on the combined cycle and CO2 emissions of 192g/km.

Other features include Night Vision with a new Pedestrian Recognition feature, Lane Departure Warning and side view cameras which can aid visibility.

Whether one chooses to drive or be driven, the new 7 Series is an all-round improvement.

Some sections of the motoring media have criticised the car for lacking sharpness, but this misses the point.

The 7 Series is not a car designed to be hustled around a race circuit, but for making serene progress and keeping occupants unflustered. This it does very well, with a supple ride and high levels of noise suppression.

The engine is an absolute peach, remaining refined and unstressed yet delivering huge surges of acceleration from way down the bottom of the rev range, matched with seamless shifts from the six-speed automatic gearbox.

There’s only one 7 Series worth considering for fleet use and, fortunately, it is a real star.

The 730d blends performance, comfort and running cost figures which will not give a fleet manager palpitations. The chairman has never had it so good.