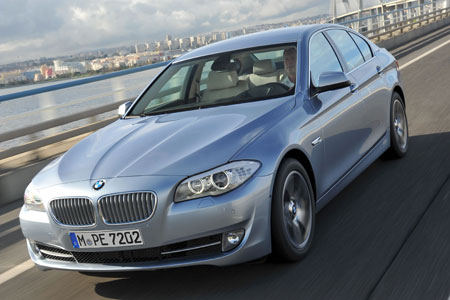 Maximum efficiency and maximum driving pleasure – the new BMW ActiveHybrid 5 doesn’t solely focus on economy and emissions. For those considering a petrol-fuelled 5 Series, it’s the equivalent of having your cake and eating it.

Based on the 535i, itself a TwinPower (read variable intake, single turbo) straight-six with 302bhp, thanks to the electric motor the hybrid has 340bhp. Oh, and it’s 16% more economical as well, offering an official combined figure of 44.1mpg.

What really matters though is the CO2 emissions figure, and the ActiveHybrid 5 emits only 149g/km – comparable to the 148g/km of the 535d, and 34g/km less than the 535i.
For company users whose fleet policy is not restricted to diesel, these figures make this particular model an appealing choice.

Save for some chintzy badging on the C-pillar and bespoke Hybrid screens in the iDrive system, it’s not very different to other versions of the 5 Series.

Those batteries have got to go somewhere though, so the boot is now only 375 litres rather than 520, in size and you can’t have it as a practical Touring model.

But boot space aside the overall impression is positive, and so it should be.

Years of development and legions of technology have been poured into this model.

The electric motor is housed within the eight-speed automatic transmission (replacing the torque converter), and allows the car to travel at speeds up to 37mph for around two-and-a-half miles on electric power alone.

Its coasting ability, where the engine is de-coupled from the driveshaft and shut down, is what stands out though – especially as it can be done at up to 100mph.

And the satellite navigation is pretty clever too, informing the car of any upcoming topography changes, speed limits or traffic problems.

This means the car has a sixth sense, using electric power to boost performance on the way up a hill, safe in the knowledge that it can recharge on the way back down.

It’ll also allow the last part of the journey to be completed in full electric mode if conditions allow. All the while the iDrive display keeps you informed of the power units’ interaction – which is just as well, as the integration of the two is seamless and otherwise unnoticeable.

What is noticeable is the standard spec though, which even includes stationary climate control to keep the cabin comfortable when the engine is off – using power from the battery in the boot.