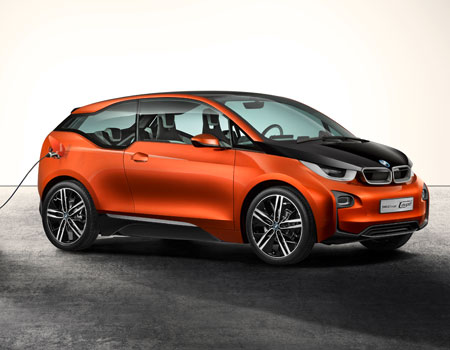 Pre-production of the car is now underway at the new factory close to where BMW builds its 1 Series range.

But the pioneering use of carbon fibre-reinforced plastic instead of sheet metal means no sparks fly from welding as the body takes shape.

And screws and rivets give way to adhesive in a basic shell consisting of 150 parts – a third less than the number in a conventional unit.

Project head Dr Carsten Breitfeld said: “We feel we have re-invented the car and redefined car production. This has been a huge challenge, but we are setting new standards.”

A spell behind the wheel of the ActiveE concept car suggests the first mass production EV from BMW will live up to the firm’s famous ‘driving machine’ slogan.

Despite carrying a substantial weight penalty of 500kg over the i3 city car due to go on sale later this year, the 1 Series model ‘mule’ is a brisk performer.

Over a route taking in the busy streets of Leipzig, the ActiveE was quick away from the lights and had power to spare in keeping pace with traffic flow.

On more open routes, a dab on the accelerator pedal was all that was needed to complete overtaking manoeuvres quickly and safely.

Though it weighs in at 1.7 tonnes, the concept is nimble and handles well, although the front suspension can feel harsh over some breaks in the road surface.

Moving along in near silence with only a subdued whirring sound entering the cabin, it is comfortable city transport that also feels remarkably refined and relaxed at motorway cruising speeds.

However, regenerating the maximum amount of electricity on overrun and during braking means the test-bed BMW slows down abruptly the moment the accelerator pedal is lifted.

With such a strong ‘pull’ from the regeneration system, there’s little need for braking for most of the time and the behaviour is annoying – until you realise that the slightest easing of pressure on the accelerator puts the drivetrain into coasting mode.

Battery can be repaired

Eight modules and 96 cells make up the lithium-ion power supply which is under the floor for maximum accident protection.

The battery has a minimum life of 10 years and can be repaired if damaged – a first for the sector.

It takes six hours for a full charge. BMW plans to offer a wallbox for domestic charging.