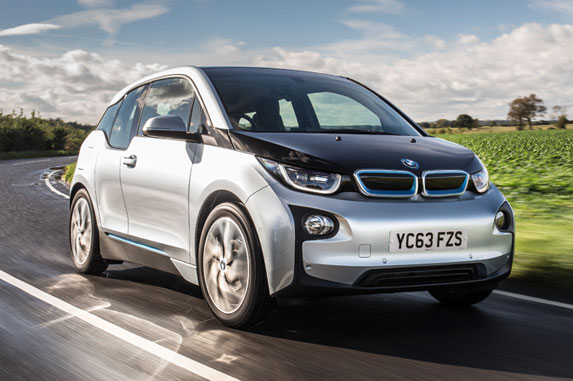 If you like the idea of electric vehicles, but a useable range of around 80 miles or so just isn’t quite enough, then a range-extender could be a feasible alternative.

We’ve already said the BMW i3 is the best electric vehicle produced to date based on time spent behind the wheel of the standard version.

The cost to customers of adding a two-cylinder motorcycle engine is £3,150.

It adds an extra 86 miles to the i3’s range of between 80 and 100 miles (depending on road and traffic conditions as well as driving style).

The residual value of the engine isn’t that strong.

Forecasts suggest a range-extender version would be worth around £400 more than the standard car after four years/40,000 miles, so to choose it, a customer would almost be a borderline case for whether the standard range would be suitable.

Or maybe just an arch-worrier when it comes to charging points and range.

The extra weight of an (admittedly small) internal combustion engine takes the edge of the i3’s performance, making the 0-62mph performance benchmark take a little longer.

But few will notice the Range Extender model feel anything other than rapid when accelerating.

While the standard car will accelerate faster than a Skoda Fabia vRS, the Range Extender will keep up with an Abarth Fiat 500 from 0-62mph.

The addition of the 647cc engine results in CO2 emissions of 13g/km and fuel consumption of 470.8mpg on the combined cycle.

The engine itself isn’t particularly intrusive or noisy and its intervention can be summoned at any point if the driver wants to save emissions-free running for later.

As the car anticipates drain on the battery, there is a lag in the engine increasing its rpm, shortly after the i3 has begun accelerating, As there is no link from the engine to the wheels, performance is seamless.

Otherwise it’s the same story as for the standard model: a sturdy and modern-looking interior with extensive use of lightweight materials and a high level of standard equipment to at least give you something to show for your investment.

The i3 Range Extender, with its two-gallon fuel tank, doesn’t really have the convenience of a Vauxhall Ampera (with its 7.5-litre tank), but these cars aren’t intended for long motorway journeys.

Although the Ampera would initially seem to be a larger car, perhaps equivalent to a C-sector hatchback to the i3’s B-sector dimensions, the two are both well matched on space and price.

The Ampera is a strict four-seater, with part of the T-shaped battery pack separating the rear foot wells. The i3, by comparison, feels airier inside, and with the absence of a B-pillar (permitted by the ultra-strong carbon fibre-reinforced plastic body) and rear-hinged back doors, the BMW is a practical small car.

There is a smartphone app to locate charging points and to allow ‘joined-up’ thinking with public transport options (or walking) if the i3’s closest charging point to its destination is still a short distance away.

Customers won’t be able to buy an i3 from every BMW dealer, at least not just yet.

There will be 47 sales agents for BMW i in the UK, many of which will be at current corporate hub dealers.

There will be dedicated sales areas and expert staff, and these outlets will also be qualified to carry out maintenance on high-voltage components as well as the rest of the car.

A further 100 outlets will be able to carry out diagnostic and body repair work, and there will be two specialist centres for carbon fibre repair.

BMW has had a long dialogue with Thatcham to try to ensure there is no misunderstanding over the cost of repairing the car and that insurance group ratings are not unnecessarily high.

And BMW’s own data suggests there is little difference in the cost of running an i3 and a 118d.

It requires a particular mindset for a fleet that is set up to adopt EV technology, and for those who are based in cities but will occasionally need a range of 100 miles or so, the i3 Range Extender is a well-executed solution.