SHALL we get the bad news out of the way first? Even if your managing director has the hefty sum of £61,760 allocated for his next company car, he couldn’t buy a BMW M5. In fact, you can’t buy one for the next three years unless you pay a premium and get one from the classified section of The Sunday Times.

The reason is simple – BMW and its M performance car division simply haven’t got the capacity to build any more of these awesome saloons; and demand for them is at such a level that the next three years’ production capacity is already sold. Just 450 right-hand drive cars will reach the UK each year.

The good news is that if you put a deposit down now, there are only 36 months to wait before your boss can get his hands on one of the finest sporting saloons ever built.

BMW UK managing director Jim O’Donnell said: ‘If we could obtain more production I’m confident we could easily out-sell our record with the last M5 (the previous generation M5 sold 1,510 units in the UK between 1999 and 2003).

‘However, it appears we will be unable to get enough and the waiting list will continue to be a long one.’ 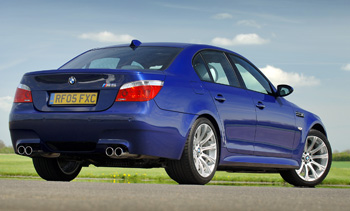 With a 5.0-litre V10 engine producing a maximum of 507bhp (or ‘just’ 400bhp in its normal start-up mode) and a seven-speed SMG sequential manual gearbox operated by steering wheel-mounted paddles, this is Formula One technology in a vaguely sensible suit.

In fact, the M5 could be mistaken for a 530d Sport, were it not for the four fat exhaust pipes exiting under the rear bumper, cooling vents in the front wing, subtle side skirts and bumpers and 19-inch alloy wheels. It is this ‘wolf in sheep’s clothing’ approach which ensures the M5’s appeal – owners don’t like to shout too much about their wealth and the performance of their car.

BMW says the typical M5 owner is a 45-year-old married man who is either a senior executive in a large company, a leading professional type or a successful business entrepreneur. He’s also got at least two other cars in his garage.

And, unlike some businessmen who prefer to be chauffeured, the M5 driver will be doing his own work behind the wheel, which is hardly surprising when you consider the performance and technology on offer.

As well as the headline power and speed figures, there’s a host of technology packed into the M5 such as Drivelogic, a system which allows the driver to choose from 11 settings for the gearbox, from fully automatic for stress-free urban driving to neck-snappingly quick upshifts with the full-on mental setting.

Then there’s the brilliant Head-up Display which projects a rev counter and speedo somewhere towards the front of the bonnet, meaning you don’t have to look down at the instrument binnacle to see what speed or revs you’re doing. This is a great safety aid, and it can’t be too long before this technology starts to filter down to other BMW models in the range.

Another great feature is the active front seats with their inflatable side bolsters. As you corner, they inflate to hold you in place, and they work brilliantly. When you’re really cornering hard, as we were on a race circuit during the car’s launch, it felt as though you were being suffocated – they really do hold you that tight.

So, that’s your boss’s appetite whetted for the M5. All you need to do now is put an order down for one and wait patiently for the next three years.

THE first challenge when you slide behind the M5’s three-spoke steering wheel is to decide which buttons to press.

You can choose to disengage the DSC traction control system if you wish, although it’s not advisable unless you have plenty of skill at the wheel. Then you’ve got to set the Drivelogic system to choose the right gearbox setting for your mood – there are 11 in total, from fully automatic to racecar sharp.

Then there’s the innocuous looking ‘M’ button on the steering wheel spoke. Pressing this button not only activates the Head-up Display, it also unleashes some extra power from the V10 engine. When the engine is started it is in default 400bhp mode until it is warmed up. But pushing ‘M’ gives you the whole nine yards, or 507bhp. This is where things get very interesting. Not only is the M5 searingly quick, but the V10 engine is also incredibly flexible. You can accelerate briskly from 40mph in seventh gear.

But it’s in full-on attack mode where the M5 takes your breath away. The sound of the V10 howling to the 8,250rpm red line is spine tingling.

And the M5 is not just a straight line demon. During the launch we were unleashed on a private race track to fully explore the M5’s handling limits. And it certainly grips well, with mild understeer in hairpins followed by some impressive power oversteer when exiting corners.

ASTONISHINGLY quick, packed with gadgets and with understated styling, the M5 is a businessman’s express par excellence. For the executive in a hurry, there’s little to touch the awesome M5.