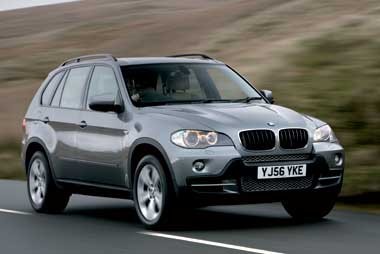 Last week an influential group of MPs called on the Government to investigate introducing a carbon trading scheme to make us all think before we travel.

The Environmental Audit Committee suggests that every time we fill up a car with fuel or fly off somewhere we should use some of a pre-determined number of points in a bid to cut greenhouse gas emissions.

On a personal note, even though I like the idea of polar bears continuing to live on the ice caps and Norfolk remaining above sea level, I hope they don’t introduce this scheme.

And the reason is simple. If I was forced to trade my carbon, last week would probably have blown my year’s allowance.

And that would be a bad thing because last week was a blinder.

Not only did I spend the week driving the subject of this road test, BMW’s X5 3.0sd, but I also took a short flight up to Wick in northernmost Scotland to sample the X5’s cousin – the coupe-cum-SUV X6.

To over-simplify the X6 offering, it is essentially an X5 with a sleeker body, designed to appeal to people who want an X5 but also want it to look more sporty.

It is a fantastic car, but I really can’t imagine why anyone could want anything more than an X5 (and nor, it seems, do a lot of other people as the X5 3.0d was the third best-selling model in BMW’s line-up last year).

Buyers, it seems, like all of those things that we’re supposed to hate about SUVs – their size, their thirst, their two-fingered salute to the environment.

You can argue the environmental issue until you’re blue (green?) in the face, but let’s leave that aside and concentrate on the X5 as a car.

In 3.0sd trim it comes with a twin-turbocharged straight-six diesel engine which delivers 286bhp through a smooth automatic gearbox.

As a result it delivers storming performance for a car of this size and shape, and some impressive economy returns, too – BMW claims 34.4mpg on the combined cycle and CO2 emissions of 216g/km thanks to EfficientDynamics technologies such as brake energy regeneration and active aerodynamics.

It also rides and handles in a way that no car of this type has a right to do – sharp turn-in on the steering, utter composure during cornering and a smooth ride on the motorway.

On the minus side, those big wheels make low-speed manoeuvres an arm-pumping experience, while on back roads the X5’s stiffness contributes to a jarring ride.

Inside it is elegant and solid, and with the ability to seat seven people in some degree of luxury.

Only the iDrive system which controls the main functions such as audio, climate and navigation, disappoints, still being neither as intuitive or as accessible as Audi’s MMI device.

And in M Sport trim with huge alloys and deep bodykit the X5 has real road presence.

It is a car which will continue to divide opinion, but one thing is true – the X5 is a stunning example of its breed, and that’s before you see how it fares on the cost sheet.

Not so good on:

P11D Price
All four cars are in top-spec sporty trim, which means big wheels, plenty of road presence and more than enough power, ranging from 268bhp in the Range Rover to 326bhp in the Audi.

The BMW is the only non-V8 engined model, but its twin-turbo six offers a healthy 286bhp.

Emissions and tax rates
Big cars require deep pockets, although at this end of the spectrum drivers are not going to baulk at BIK bills of around £600 a month.

SMR Cost
The BMW comes with 19-inch alloy wheels and variable servicing intervals, which help it to the lowest SMR costs of our quartet.

The Mercedes-Benz has the same combination and will cost around £300 more.

The Audi and Range Rover come with 20-inch alloys, but the latter has 15,000-mile intervals.

Fuel cost
With claimed average fuel economy of 34.4mpg, the twin-turbo straight-six X5 is streets ahead of its V8-engined rivals.

Depreciation cost
The BMW will retain the most money, with CAP estimating it will hold on to 49% of its cost new after three years and 60,000 miles.

With a much lower front-end price this means it has a commanding lead in this section.

Wholelife cost
A convincing victory for the X5, with class-leading performances in all sectors.

The BMW’s lower front-end price helps, as does having the cheapest SMR and fuel bills and the slowest level of depreciation.

Verdict
Sometimes a car is so far ahead of its rivals in a sector that it becomes the only choice, and that is true of the X5. While its three rivals score highly on badge appeal, road presence and performance, none can match the all-round ability of the X5.

Not only is it the cheapest car in this test (although I use the term 'cheap' loosely), it is also the best in terms of ride and handling, offers strong performance, the lowest tax bills for drivers and also has a massive advantage in running costs for a fleet manager.

It really is game, set and match to the BMW.

However, if you fancy rooting for the underdog and cost is not a deciding factor, the Range Rover Sport is a lovely, classy option.