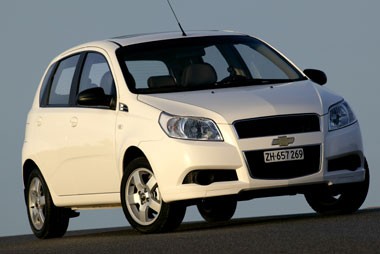 When journalists jumped into the revamped Chevrolet Aveo at the launch event, they found the CD player had been preloaded withclassic American driving songs, all of which name-checked the historic US brand.

Presumably this was meant to invoke imagery of driving some sort of Hemi-powered piece of Americana across the plains of Wisconsin.

Unfortunately, as the Aveo is little more than a rebadged Kalos – formerly labelled as a Daewoo – it merely served as a reminder of how far modern European Chevrolets are from the icons of yesteryear.

The new Aveo is an upgraded version of its predecessor rather than an all-new car.

The new design represents the future look of the Chevrolet range and has some interesting lines and features.

The interior has been upgraded with a noticeable increase in quality.

Two engines are available – a 1.2 petrol with 83bhp or a 100bhp 1.4. A quarter of Aveos will go to fleets, with Motability making up a sizable proportion thanks to the option of an automatic gearbox.

No diesel unit will be available until the next generation in three or four years’ time.

There are no unpleasant surprises driving the Aveo.

Everything is laid out in a logical manner and build and material quality is acceptable, if reflective of the car’s budget price tag, expected to start at under £8,000.

The seats are almost entirely without lateral support, which is no problem in town but a trifle uncomfortable when the Tarmac gets twisty.

The left-hand drive model available at the launch proved problematic to my right knee, which kept walloping the centre console, but hopefully that issue will vanish in UK versions.

The 1.4 petrol engine we tried is a strange one. Although it boasts more power than its 1.2-litre sibling, it felt strangely gutless, and while following a 1.2 model onto the motorway I was surprised to see it power away from me.

Still, the Aveo is hardly built for speed and pootles around town quite happily.

It just needs working quite hard to make any kind of serious progress and seemed to struggle on steep inclines.

The Aveo is better looking and better made than the car it replaces which, combined with the rise of Chevrolet sales in the UK, should ensure it does well in the retail market.

But, with no diesel option and unremarkable emissions, it may be of less interest to fleet managers.