The Chrysler 300C looks pretty tough – and it will need to act tough too considering the fight for sales it will have on its hands when it arrives next month.

The executive saloon market is one of the toughest there is, combining a small and declining base of sales with a very badge-conscious customer base.

This would be a tough market for any manufacturer to enter, but to do so without a diesel would guarantee that any sort of success remained elusive.

So while the 300C can guarantee some sales, thanks to its eye-catching looks, it was essential that a diesel unit joined the 3.5-litre V6 and 5.7-litre V8 that will be offered with the car from launch this month.

In keeping with the Chrysler focus on style and keen pricing, the diesel will be offered at £25,750, the same as the V6 petrol model, which comfortably undercuts rival models in the sector, even before equipment levels are taken into account.

The diesel unit, already used in the Grand Cherokee, offers 218bhp at 3,800rpm and 376lb-ft of torque from 1,600-2,800rpm. Service intervals are every 12,500 miles and it has a maintenance-free diesel particulate filter as standard.

Through a five-speed automatic gearbox, courtesy of Mercedes-Benz, the car reaches 62mph in 7.6 seconds and goes on to hit 143mph.

However, the key benefit of the diesel choice is fuel consumption, which is officially listed at 34.9mpg instead of 25.4mpg for the V6 petrol. In addition, the petrol is also slower to 62mph by more than two seconds and has a slower top speed.

When pricing includes matched specification, Chrysler claims the 300c is up to 30% cheaper that some of its German rivals.

Combined with its looks, which have already secured 200,000 sales elsewhere in the world and made it one of the most awarded cars in automotive history, the tough challenge of carving out a share of the market is possible, according to Chrysler Group UK marketing director Steve Gray.

He said: ‘There are a lot of companies coming into that segment and we do have a job to do, but I think it will cause a stir and attract drivers from a wide range of other brands and models.’

The big problem the 300c will encounter is residual values. CAP reckons it will be up to 10 percentage points lower than rivals from BMW and Mercedes-Benz, which means it could be worth up to £6,000 less at resale time. 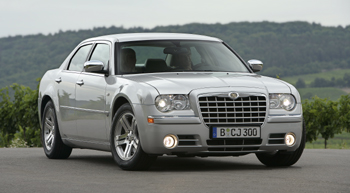 RESEARCH by Chrysler shows that drivers of its cars overwhelmingly want a model with unusual styling and the 300C hits the spot on that front.

During an evaluation drive near Graz, Austria, where the car is built, there were plenty of quizzical and admiring looks from drivers and pedestrians.

When the 300C arrives in the UK this month, it is certain to grab as much attention as it can handle.

From the outside, everything about the car – from the high waistline to the imposing front grille – demands that people stop and stare. Inside, it offers a comfortable and pleasant environment which isn’t ruined once you turn the key.

Interior sound-proofing means the traditional diesel clatter is very muted at start up and once the revs build it actually makes a pleasant growling noise.

The engine provides a real kick of acceleration from low revs, ideal for joining motorways, and it settles down to almost silent running when cruising.

It revs freely and offers excellent acceleration from slow speed when you need to overtake. Kick-down is very sluggish though, so there is a bit of a wait if power is needed suddenly and the manual gear selection isn’t intuitive, as you push the gearstick left and right to change, instead of forward and back.

This is only needed for sporting driving, though, and the diesel is better left in a middle gear so you can use its wide-ranging power band instead. However, the steering doesn’t give you confidence to enter corners at speed as it lacks enough feel to keep you informed about how much grip the front wheels have left.

Mind you, this car is far more at home cruising through towns soaking up the admiring glances of passers-by.

The Chrysler 300C makes a good case for itself, with low price, high equipment levels and great looks to attract drivers.

The diesel is the only sensible option if your drivers have to cover any significant mileage, but in BIK terms it is only slightly cheaper than the V6 petrol.