IT’S the sort of car that transports me back to the days when watching Starsky and Hutch on a Friday night was a religion.

The Chrysler Crossfire’s retro looks catapult it back to when fast American sports cars were chased across the Bay City metropolis by a red Ford Torino with white chevrons along its sides.

Such a bold style ensures the car stands out from the crowd but divides opinion in a love-it or hate-it type of way. 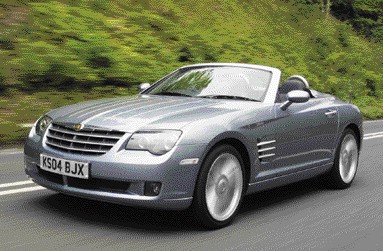 The Crossfire coupe has now been joined by an open top Roadster which will compete with the likes of the BMW Z4, Nissan 350Z, Audi TT Roadster and Honda S2000.

Although the front end is the same as its coupe version, the back end is less dramatic with a plastic tonneau hiding the fabric roof when retracted.

Like the coupe, it features a retractable spoiler that activates when the car reaches 60mph and uses the old Mercedes-Benz 3.2-litre V6 engine.

In fact, the only two options available are special paint and a satellite navigation system.

While most roadster versions carry a hefty premium over their coupe equivalent, the Crossfire convertible costs just £735 more. Perhaps this signifies that Chrysler bosses privately believe the coupe is priced a little high.

According to the company’s marketing gurus, most Crossfire drivers are likely to be company directors or business owners with an average age of 43 and most probably have no young children at home, which is just as well as this two-seater isn’t ideal for family days out.

Chrysler Group executive director of international sales and marketing, Thomas Hausch, said: ‘We designed this vehicle to be a high-speed roadster and the result is a stunning convertible that is tight, solid and well engineered – and one which also looks great with the top raised.’

Senior vice-president of design Trevor Creed added: ‘The new Chrysler Crossfire Roadster is a drop-top that will drop jaws this summer.

‘Even with the integration of a fabric top, our designers met the challenge of maintaining the Crossfire’s distinctive lines and dynamic proportions.

‘Sometimes when you remove the roof to create a convertible, the result isn’t what you expect. With the Crossfire Roadster, that’s not true. It’s as handsome, if not more dashing, than the coupe.’

CAP Monitor believes the Roadster will hold its value just as well as the coupe, with 48% of its value retained after three years/60,000 miles and 47% for the automatic – a sound investment for fleets.

Expect high-performance versions of the Crossfire and Roadster in the future, both using a supercharged version of the 3.2-litre V6.

HAVING spent a thoroughly enjoyable week behind the wheel of the Crossfire coupe recently, I was eager to try the roadster version and my chance arrived on a gloriously hot day.

Climbing aboard I was reminded of when I tried the coupe – I was won over by its retro looks and, although the interior was plasticky and not what you’d expect from a car with a price tag of almost £30,000, it had enough charm to compensate.

There are few things I like better than a spell of open-top motoring, out in the sunshine, especially when I’m in a car which prompts double-takes from passers-by as they try to get another look.

The automatic roof is activated by a button on the centre console. It goes down in 22 seconds, but having to pull the hood down manually to finally lock it in place was awkward.

It felt stiff and needed a hard yank to ensure it fitted back correctly. I assume it will soften over time but I would have preferred the whole process to have been fully automatic.

Driving with the roof down caused quite a bit of wind noise and a little buffeting, but it’s a very small sacrifice to make for the pleasure of open-top motoring. Anyway, convertible aficionados will be well used to it.

Another thing I found annoying was the placing of the cruise control stalk which was just above the all-singing, all-dancing Mercedes-Benz-style indicator stalk on the left. On a couple of occasions I attempted to indicate using the wrong stick and when I did get the right one I’d inadvertently knock the other with the back of my hand.

Nevertheless, my criticisms of this car are relatively minor and none of them affected my overall driving enjoyment – it was fabulous.

It looks fantastic with the roof up but is really in its element when it’s down. It doesn’t seem to ride quite as harshly as the coupe, and those huge 19-inch wheels at the rear mean it is very difficult for the Roadster to lose traction with the road. This is also partly due to its power output being adequate rather than awesome.

The Crossfire Roadster is stunning-looking and good to drive. However, although it isn’t the best-finished roadster within the price range and doesn’t have the best performance, I would still seriously consider the Crossfire for its striking good looks.