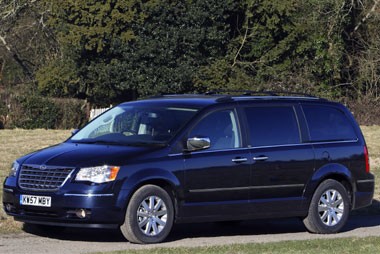 The new Chrysler Grand Voyager still looks like a van, the driving experience is distinctly average and some of the interior quality is a little ropey, but none of this matters a jot.

What matter most is this – the new Grand Voyager is one of the cleverest cars on the market and provides a real solution to staff with large families.

Picking up the cudgels from the previous model, the new Grand Voyager brings revised styling (it’s now more boxy than before), updated engines, more room inside and even more detail changes for the rear passengers.

And prices remain unchanged, with the diesel LX model starting at £25,995.

However, the majority of buyers of the previous version went for the full-house Limited, which costs £32,995.

Many will also opt for the impressive rear entertainment option pack at £2,000, which includes two drop-down screens for the second and third row of passengers, a DVD player, input jacks for items such as a Play
Station and the MyGIG infotainment system which incorporates a 20Gb hard drive.

With this option box ticked, the back of the Grand Voyager is undoubtedly the best place to be, with comfortable seats replete with armrests and plenty of legroom.

Then there’s the very clever Stow ‘n Go seating system which allows all the rear seats to be folded down into the floor, creating a large, van-like loading area.

Factor in the myriad cubby holes and storage areas and you’re left with the perfect vehicle for a large family.

The diesel will be the big seller, accounting for upwards of 90% of registrations.

Chrysler expects to sell around 2,000 units a year, which is down on the model’s peak, but this is due to the smaller Voyager being dropped.

Its place will be taken later this year by the Dodge Journey.

Chrysler has made some effort to improve the feel of the Grand Voyager’s cabin – some of it successful, some of it not.

The general look is much improved with a more premium-looking dashboard and centre console echoing the look of the 300C range, though some of the plastics still look and feel brittle.

As a driving experience, my test in the Grand Voyager certainly won’t go down in my all-time top 10 drives, but that misses the point.

Yes it feels slow, and that’s because it is, but who wants to have the children in the back thrown around during cornering?

After all, they may miss a crucial scene from the film they’ll be watching.

The Grand Voyager has many strings to its bow – it is well-equipped, competitively priced and has a spacious and flexible interior which is hard to fault, or indeed match.