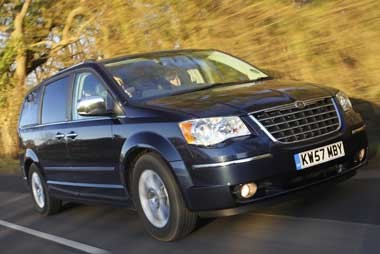 A lot of the time you can tell how good a car is going to be without even turning the engine on.

Just opening the door and sitting in the driver’s seat, taking in the ambience of the cabin, the fit, finish and quality of materials and so on gives a very good indication of the likely overall ownership experience.

A shame then, that getting into the Chrysler Grand Voyager gives an almost immediate feeling of disappointment.

From the outside, things aren’t too bad. The long-established people carrier has had an exterior makeover.

The roof has been widened to create a roomier feel and many design cues from the 300C saloon – such as flared wheel arches and lashings of chrome – have been swiped and added on to the larger vehicle.

Although it looks squarer than its slightly bubbly predecessor, the new look apparently improves the aerodynamic efficiency.

Inside though, the immediate impression is one of cheapness.

The materials and general quality of the interior is pretty poor, from the flimsy plastic adorning the dash to the handbrake gaiter, which is a rather nasty feeling rubber and doesn’t cover all the internal workings.

This continues outside – while the twin electric sliding doors that open up the back section of the car are impressive and useful, they reveal a snaking mass of belts and electrical workings that don’t really look that good.

The one big thing that the Grand Voyager does have going for it is its size – there is absolutely masses of room in it, for passengers and all their cargo.

Legroom is bountiful, there are storage spaces dotted about all over the place – in the roof, under the floor and in various cubby holes – and the boot, even with all seven seats in place, is 756 litres.

That’s a lot of golf clubs.

Power comes from a 161bhp 2.8-litre diesel engine which develops 265lb-ft of torque, mated to an automatic gearbox.

That will whisk the Grand Voyager from standstill to 62mph in 12.8 seconds and on to 115mph if you really want to go that fast.

The engine is best described as adequate, as is the gearbox.

Fuel consumption is pretty poor at 30.4mpg and so are CO2 emissions at 247g/km.

Neither are great examples of modern engineering, and feel a bit coarse and agricultural, but they work.

The same is true of the suspension.

Do not expect anything even approaching an enjoyable drive in the Grand Voyager – it’s functional and nothing more.

The ride is bearable, although it pitches back and forth far more than I’d like, even on the tiny undulations found on fairly smooth motorways.

So, in conclusion, the Grand Voyager has one really good trick up its sleeve, and that’s space.

You can get so much stuff in among the seven people, and if that’s what you really need from your MPV, then you can do no better.

If you want build quality, economy and a decent driving experience, then cast your net wider.

P11d price
The 138bhp Ford is the cheapest, but has the smallest boot and is the least powerful.

The 161bhp Chrysler has by far the biggest boot.

The 148bhp Grand Espace includes part leather while the most expensive C8 features full leather and the most powerful engine at 173bhp.

Emissions and tax rates
The Ford emits the least CO2 and so occupies a lower band of company car tax. A 40% taxpayer would face a monthly bill of £260.

The Renault and Citroën both fall into the 34% band and attract bills of £312 and £318 a month respectively.

SMR cost
The Ford is narrowly the cheapest, just beating the Citroën despite the French car’s 20,000-mile service interval. The Chrysler is slightly off the pace despite having smaller tyres, while the Renault is the most expensive with a service interval of 12,000 miles. The Ford and Chrysler need servicing every 12,500 miles.

Fuel cost
The Ford is a frugal beast and easily beats the competition here.

A combined fuel economy of 38.2mpg means it costs almost £1,000 less to fuel over three years/60,000 miles than the Citroën and the Renault, which both return 34.4mpg.

Depreciation cost
The Galaxy holds on to its value well, as does the Chrysler.

The two French cars can’t keep up – the Renault will retain 30% of its value and the Citroën 26%.

Wholelife cost
The Galaxy is easily the cheapest car to run overall.

It is the strongest in every area and will cost almost £3,000 less to run over three years/60,000 miles than the second-placed Chrysler.

The French cars are completely outclassed overall, despite some decent features.

Verdict
The Ford Galaxy is the only logical choice here.

It is completely dominant when it comes to cost, and is also the best car to drive.

The Voyager emerges in a respectable second place and, despite lacklustre fuel economy and a lower quality feel, will appeal to those who value space or power over everything else.

Neither the Grand Espace or C8 are bad cars – they’re just old and can’t compete on price or running costs, and their relatively poor residuals let them down.