ONE in ten new cars sold in Britain is an MPV, so most manufacturers have at least one in their range.

But only Citroen has three different compact MPVs, as well as one larger model. The five-seater C4 Picasso has just joined the existing line-up of Xsara Picasso, seven-seater C4 Grand Picasso and the eight-seater, sliding-door C8. 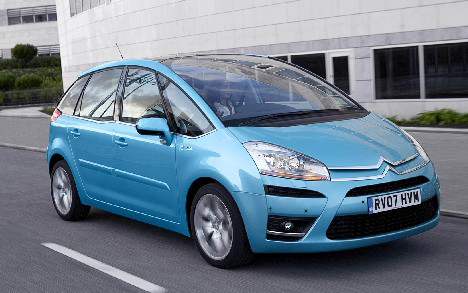 Adding a third string to its compact MPV bow looks a canny move by Citroen. Of the 250,000 such cars that annually find buyers in the UK, two-thirds are five-seater models like the new C4 Picasso.

It fits into the range between the highly successful Xsara Picasso and the C4 Grand Picasso, of which it is effectively a scaled-down version. The front end looks pretty similar, but the two siblings have very little in common from the B-pillar backwards.

By general consensus this is Citroen's best-looking MPV yet – not quite so hunched forward as the Xsara Picasso which is the brand's fleet best-seller, and more youthful and sporty than the slightly stretched looking seven-seater.

Although edgier and more stylish outside than the seven-seater, inside the C4 Picasso is a dead ringer for its bigger brother. The dashboard is the same, and interior decor is similar, with quality seat fabrics and soft-touch plastic trim giving the cabin a junior boardroom feel.

The unusually large Visiospace windscreen stretches up and back above the driver's head, and comes with sun visors which slide forward on rail to stop the interior from becoming a dazzle-trap in bright weather.

Seat-stowing flexibility is as practical as it needs to be against tough competition in the MPV market, and among the easiest to operate. The individually-split back seats slide and fold to create a flat floor that increases the boot's 500 litres capacity to a maximum of 1,734 litres. There is an optional Modubox – a folding portable trolley which stows in the side of the boot, and in high-spec models it comes with a removable insulated bag.

The steering column paddles come with the EGS (Electronic Gear System) automated manual gearbox. At £500 this is a much cheaper option than the typical £1,000 for an automatic, and it also has the advantages of lower emissions and better mpg.

From the moment you settle behind the wheel in a cabin that is unusually light and airy, the C4 Picasso feels a class act.

The centre of gravity has been kept relatively low for an MPV, so it has a squat stance on the road that makes it a more rewarding drive than you might expect of such a tall-standing car.

It is easy to see out of in every direction, and that huge windscreen is a boon. In bright sunshine though you find yourself hurrying to pull the sliding visors down to where they would be in a car with a normal size screen.

Anyone tempted by the EGS gearbox really must try the car with it first. On paper it is very attractive: with the 1.6 HDi diesel engine that is likely to be the fleet best-seller, having EGS brings the CO2 figure down by 5g/km to 150g/km, and improves fuel consumption by 2mpg.

But it is less impressive on the road, because in automatic mode it feels unsophisticated with sluggish and jerky gearchanges. So although EGS looks good, if you're likely to use it mostly in auto prepare to find it disappointing. Citroen says it is intended to be used mostly in manual mode, and even suggests that drivers need to be taught how to use it. But the car is a sweeter drive with either a conventional six-speed manual or full automatic.

Classy looks give the C4 Picasso a strong kerbside draw, but its appeal goes way beyond skin-deep. It's good to drive, with a light, airy interior and seats which are commendably quick and easy to stow flat when you want extended luggage space. Shame the automated manual EGS gearbox isn't smoother.