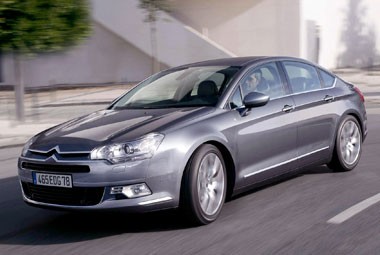 According to André Citroën in some recent adverts from the manufacturer “Different is everything”.

Well, not any more it seems, because the firm that has revelled in its legacy of French inventiveness and eccentric individuality has decided that “German is everything’ with its new C5.

Citroën’s new upper-medium model is being touted in its marketing as a new German saloon, replete with German quality, made in France. Inferiority complex? Looks that way.

It’s no surprise that Citroën should cast envious eyes at its neighbours. In the fleet market, Citroën’s influence has waned in direct contrast to the rise of the German premium brands.

And to be honest, it was all Citroën’s fault. Once it was selling 40,000 Xantias a year to fleets, but then came the wilderness years and the first C5 – its uninspiring appeal matched only by its tendency to unreliability, especially of the electrical sort, which saw sales drop into the low thousands.

So talking endlessly about how much better this new one is, and how it has been built with all the attention and exactitude of the keenest Klaus is a brave move that goes one of two ways: the C5 backs up that claim and everybody raises a glass of champagne, or the industry sniggers at another French manufacturer claiming to have built a precision instrument, when in fact we’ve ended up with a kazoo.

First impressions, though, suggest it is going to go the first way, because this new C5 is a very lovely car indeed.

Starting on the outside, the C5 looks the part, taking some of the bold design of the C6 such as the concave rear window and wide double chevron-peaked nose alongside some solid-looking flanks while the boot area has clearly been nicked from Audi.

Inside, the C5 is just as good with very high quality materials indeed. Some of the soft plastics are so yielding you can almost leave a thumbprint while the flamboyant sweeps of the door handles show real thought.

The improvement in quality, even over the much-improved last Picasso, is marked.

Apparently this is down to a new approach in the development process.

Previously the designers would design, then hand the plans over in their entirety to the engineers.

Now the designers work with the engineers, meshing together to solve production issues.

Seems logical, and it seems to have worked.

On the petrol front, there’s the requisite lame duck 3.0 V6 as well as 1.8 and 2.0 versions, both of which have high-ish emissions.

They won’t see much action: fleet is going to take up the largest share of sales, with up to 70% heading to the company car park, of which most will be diesel.

Quite what that number will be exactly is shrouded in secrecy. For some unfathomable reason, Citroën prefers not to talk about volume.

This has to be a mistake: the firm has had a legacy of cashbacks undermining residuals and dodgy build quality. It now has a top drawer product.

It’s the time to be open and frank about everything and start building some trust. At a guess, 10,000 units a year seems a reasonable volume.

With the range starting at £15,600 and rising to around £24,000, the residual values quoted at the launch were surprisingly high – the 36% predicted by CAP after three years and 60,000 miles would be a superb achievement seeing as the old car ended in the mid-20s.

So what is going to make the C5 achieve these heady heights? Well, as mentioned before the cabin is well-built and trimmed, is spacious front and back, and it comes with all the gadgets expected of a Citroën such as Lane Departure Warning System, the fixed centre steering wheel and the latest generation Hydr-active III + suspension which has setting for sport and normal.

On this version, though, there is a metal sprung suspension version available for those that prefer their cars on more traditional seating.

The focus on all things Allemagne is laudable in other areas. It’s good to see that Citroën hasn’t given the C5 a brittle ride while trying to make it sporty, but has stuck to its guns on how a Citroën should drive.

Driving for business is a stressful business and this C5 might well be the perfect antidote.

We started off in the 1.6 HDi 110 with Hydractive suspension. It is not especially fast, but it is quiet and there is more than adequate performance for the type of laid-back drive this car lulls you into.

The Hydractive suspension floats you across all manner of road surfaces.

My only complaint is the controls.

The centred steering wheel boss is littered with little symbols and switches, while the centre console has that PSA system that requires binoculars to identify the buttons.

Then we moved on to a 2.0 HDi with metal suspension. Suddenly I noticed there was a road under the rubber, and it felt a little more lively through bends.

The C5 looks really good and it drives nicely, seems very well put together and is very comfortable, too.

Despite all the waffle about the German influence, the C5 feels like a French car should without being built like French cars have been. In my book, that makes for a winning combination.

Citroën is well and truly back in fleet.