And from July, Dodge sincerely hopes that the name Caliber will also trip off the tongue when these four big-selling models are mentioned.

That’s when the American brand’s new model goes on sale in the UK, bringing bold styling and competitive pricing to the sector.

This will be the second Dodge to hit our shores and while it hasn’t got the thunderous appeal of the mighty V10-engined Viper, it is set to find a lot more homes than the truck-engined supercar.

Dodge expects between 5,000 and 7,000 sales in the UK in a full year and it is pinning its hopes on a single-minded sales pitch – standing out from the crowd.

In this respect the Caliber lives up to its billing thanks to its quasi-SUV looks – it’s chunky and has a fairly high ride height despite being only front-wheel drive.

And this is a wise move. Dodge, part of the Chrysler Group US which also incorporates Jeep and Chrysler, knows that it hasn’t got the brand strength to compete with established players such as Ford, Vauxhall and Volkswagen in the lower-medium sector. So the Caliber is being pitched at drivers who want to drive something which stands out from the crowd.

You can guess where this is going, can’t you? Yep, ‘lifestyle’ buyers, whatever they may be.

To this end, the Caliber matches its crossover styling with a flexible interior offering rear seats which fold fully flat, optional soil-repellent seat fabrics, chilled glovebox and something called MusicGate Power – essentially a nine-speaker stereo which features a pair of speakers which drop down when the tailgate is lifted to create an outdoors concert hall.

The interior is also very spacious thanks to the high roofline and generous width. Five adults will fit in without complaint.

Dodge is targeting a broad group of buyers with the Caliber – people who might be considering a more traditional lower or upper-medium model, as well as mid-sized SUVs. Potential drivers will be predominantly men aged in their late 30s.

Steve Gray, Chrysler Group UK’s marketing director, said: ‘Dodge can translate into a global brand, as has been seen with US brands such as Levi’s and Coca Cola.

‘The lower-medium sector is dominated by the volume groups but there is a niche for men who want to make a strong statement. Our research states that drivers are bored with the bland offerings in this part of the market. They want a boldly-styled, affordable car.’

Caliber pricing starts at £11,495 and rises to £15,430 which, Dodge is keen to point out, is very cheap, especially when you take into account the extra level of equipment you get as standard compared with its volume rivals.

And unlike its fellow recent American import, the Cadillac BLS, there is a wide dealer network. The Caliber will be sold from the UK’s 88 Chrysler centres, which are being rebranded to incorporate Dodge into the family alongside Jeep and Chrysler.

Dodge wouldn’t be drawn on the fleet/private sales split for the Caliber, instead saying that it hopes to attract user-choosers but realises that the private sector will be its first port of call as it builds the brand in the UK.

FROM the outside the Caliber looks suitably different to stand out on the road from the ranks of lower-medium cars, but inside it falls far short.

The dashboard and door plastics are not pretty to look at, let alone to touch. They have a hard, utilitarian feel which lack the quality of its European rivals.

There’s a general feeling of being sat inside a car from 10 years ago, rather than one at the cutting edge in 2006. However, some of the packaging is very neat, such as the torch built into the roof lining and the three-part glovebox with chilled centre section.

Three engine options will be offered – two petrols in 1.8 and 2.0-litre guises and a 2.0-litre Volkswagen diesel. 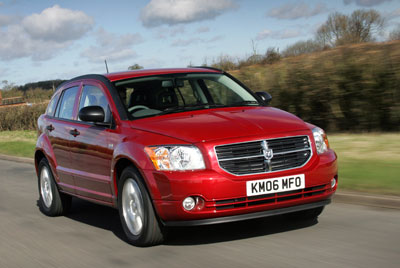 Our first drive was in the diesel – and it proved to be the pick of the bunch. With 138bhp the 2.0-litre turbodiesel offers plenty of mid-range overtaking power and relaxed, low rev cruising. However, it is quite noisy, both at start-up and on the move.

The diesel comes fitted with a six-speed manual gearbox which seemed to not like being used when cold. My co-driver and I both had trouble engaging second gear at the start of our test drives. However, things improved once the box had had time to warm up.

The other engine available to try was the 2.0-litre petrol, which only comes with a CVT continuously variable transmission. This is undoubtedly the weakest link. The gearbox is almost schizophrenic in its workings – sometimes changing up too early and other times holding the engine at the red line for far too long. It’s annoying and unpleasant.

COMPARED to its rivals, the Caliber is not in the same league when it comes to on-road prowess. Diesel aside, the engines are poor, while the handling and ride are also lacking.

Drivers will really have to want to stand out from the crowd to choose the Caliber. 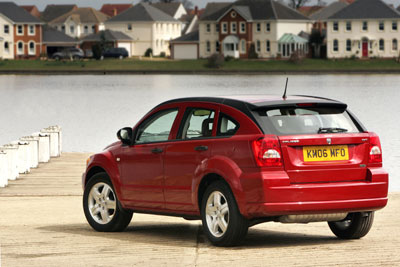