DODGE has taken something of a knocking in the motoring press (yours truly included) these past few weeks, most notably for its below-par Avenger upper-medium contender.

But things aren’t all bad and the firm’s other new model, the Nitro SUV, is a far more convincing case for bringing the US brand over the Pond.

As the photograph on the right suggests, the Nitro has the rugged looks and imposing road stance to make it stand out in the SUV sector. Subtle it ain’t, but it encapsulates what Dodge is all about – attitude.

On sale from July, the Nitro will be available in two versions – the 2.8-litre CRD turbodiesel and the 3.7-litre V6 petrol.

Obviously the diesel will be the model of choice, returning real-world economy figures and emissions which are on the acceptable side of the usual SUV profligacy.

Two trim levels will be offered – SE and SXT. The latter is the one to go for, if only because it comes with 20-inch alloy wheels which fill out the Nitro’s huge wheelarches and prevent the car from looking undershod.

Inside, the story is much the same as the Avenger, meaning plastics which look and feel cheap.

Dodge plans to sell around 3,000 Nitros in the UK this year – the same number as it has planned for the Avenger, although there won’t be many fleet sales for the Hyundai Santa Fe challenger.

If my money were on it, I’d bank on seeing a lot more Nitros than Avengers on our roads.

BIG and brash, the Nitro doesn’t do things by halves. It may not be the most refined SUV, but it has plenty of character and looks that make it stand out on the road. In such a fashion-conscious sector, the Nitro will find itself a deserving niche.

STRANGELY, the cheap-looking plastics in the Nitro aren’t as offensive as they are on the Avenger – perhaps it’s because of the Nitro’s more rugged, outdoor role.

On the road the Nitro is not what you’d call cutting edge, with its long-throw gearshift, over-assisted steering and bumpy ride.

But the 2.8-litre diesel engine provides a decent amount of performance and coupled to the optional five-speed automatic gearbox makes for a strong combination.

On road, the Nitro operates in rear-wheel drive layout, while for the muddy stuff it can be switched to four-wheel drive at the flick of a switch, coping as well as any other fashion SUV. 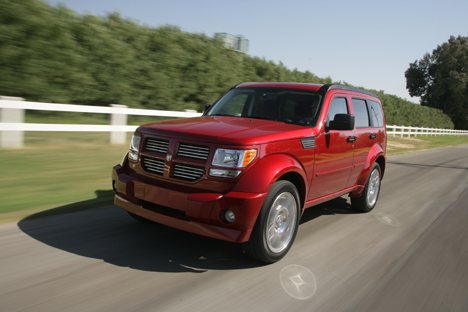