WHEN I was learning to drive, the first car I pootled around Worcestershire in was a Fiat Punto.

Frankly, at that time I had no real frame of reference to decide whether it was good or not. So I was intrigued to know what the Punto’s descendent, the Grande Punto, would be like.

I had high expectations, mainly due to the looks of the thing. From the front it looks uncannily like a Maserati thanks to its rectangular grille and elliptical headlights. Fiat isn’t rushing to disassociate itself from its fellow Italians, and why would it? The Maserati Coupe with which the Grande Punto shares a face is a stylish beast, and the prestige brand is owned by Fiat anyway.

The rest of the car does not have quite as much impact as the front, but it still looks good. Its shoulders rise along the sides towards the back, and the rear, while quite featureless, still looks smart in a minimalist kind of way.

Jump inside, however, and things aren’t as impressive. Fiat’s promotional material calls the interior ‘bright, inspiring surroundings’. I call it gaudy.

Our test car featured a large slab of blue plastic across the lower dash, while the designers eschewed modern soft-touch materials in favour of more scratchy plastic for the main dash and instrument binnacle, which feels brittle to the touch.

We tried the 1.4-litre petrol engine which musters 77bhp, putting it on a par with similar-sized engines from Ford and Peugeot.

As you’d expect, performance isn’t this car’s strong point and it needs a lot of revs to make decent progress on the open road. However, in its natural habitat around town it fares well, being peppy enough for nipping about in.

This is helped by the steering, which is really light and can be made even lighter by pressing the city button to provide even more assistance for parking manouevres. But the steering wheel has some ergonomic problems – the rim fattens far too much at the traditional ‘ten-to-two’ position and is uncomfortable to hold. 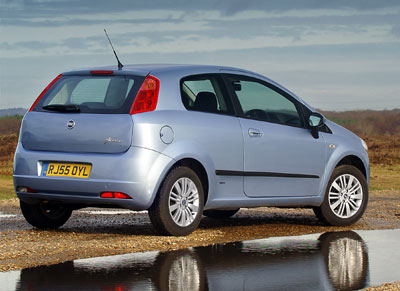 At least there’s plenty of room inside. Like the Peugeot 207 and Renault Clio, the Grande Punto lives up to its name by being much bigger than the car it replaces.

It matches the aforementioned models in all aspects of size, creating a decent cabin for four adults to sit comfortably in, and a boot which can cope with far more then just a few bags of shopping.

So the Grande Punto is a stylish, roomy supermini which is let down by an interior which simply doesn’t have the same feel as the Peugeot 207.

To challenge for victory, it needs to perform well in the running costs section. 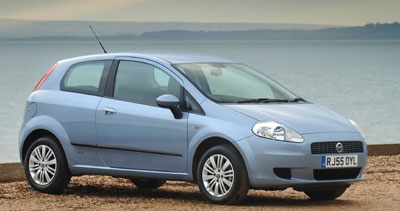