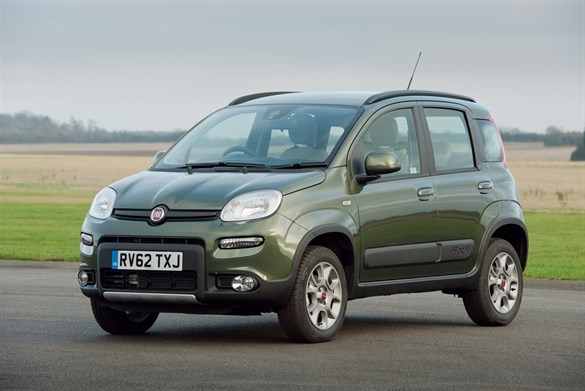 Fiat executives aren’t counting on another bout of harsh winter weather to give their latest model a flying start in the showrooms - but they do expect the return of the Panda 4x4 to win an enthusiastic welcome from a loyal band of aficionados.

After an absence of two years, the world’s most capable off-road city car boasts extra tenacity in the rough from major engineering revisions that include a sophisticated traction control system and revised suspension.

“We are fortunate enough to have a group of customers who have accounted for up to 600 annual registrations for the previous version and I would expect them to give a similar response to the new car.

“But I’d be happy to be proved wrong – a lot of interest has been shown in the 4x4 over the last few months and we will have no problem with supply if demand is higher.

“Traditionally, the Panda has been popular with midwives and vets but a growing number of people need to remain mobile irrespective of weather conditions and I think this would be useful transport for farmers, coastguards and mountain rescue teams. We’re already discussing its potential with the Forestry Commission,” Fiat UK senior product manager Rob Lake told Fleet News.

In the latest Panda bodywork, the third-generation 4x4 is bigger all round and boasts improved interior packaging, more versatility and one of the biggest luggage compartments in the A-sector. Powered by a start-stop equipped Multijet diesel motor, it drives with more agility than the performance figures suggest.

With a front strut suspension linked to a torsion beam rear layout, on-road ride comfort is good even though off-road prowess is significantly improved thanks to a smart drive system with two differentials and an electronic coupling that saves fuel by staying in front wheel drive for most of the time.

Pressing a button is all that’s needed for more challenging terrain. It switches in the electronic locking differential and worked well with the mud and snow tyres that are fitted as standard to help our test car splash, squelch and scramble its way around a tough course with impressive ease as power from the lusty Multijet diesel motor was sent to the wheels with the best traction.

Aided by a 16cm ground clearance and protected by underside skid plates, this is a mini SUV with stamina and abilities that belie its size. Based on the top-range Lounge version, the car carries a £2,700 premium but is well equipped with air conditioning, 15-inch alloy wheels, power mirrors and front windows, ESP, a multimedia system and steering wheel controls.