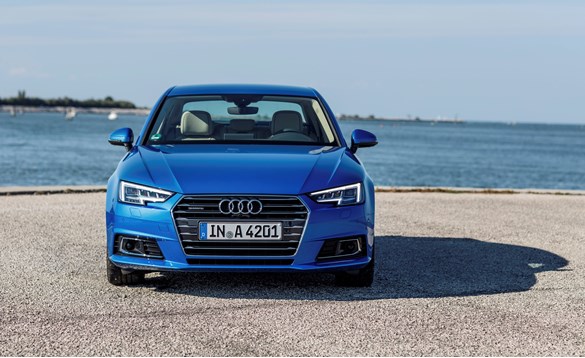 You’d be forgiven for thinking the Audi A4 has just undergone a mild facelift. But what you see here (view gallery) is an entirely new car.

It’s up to 120kg lighter than its predecessor and with a class leading drag co-efficient, fuel economy equals the best in class.

The A4 comes with a choice of four diesel engines, with 150hp and 190hp 2.0 TDI engines coming under the Ultra banner, with CO2 from 99g/km. Alternatively there is a 218hp front-wheel drive 3.0-litre V6 diesel, available with Audi’s duel-clutch S-Tronic auto for the first time rather than the Multitronic CVT. There is also a 272hp 3.0 TDI Quattro which uses an eight-speed automatic.

But Audi is also keen to note new petrol engines. There is a 150 1.4 TFSI that reduces fuel consumption with cylinder-on-demand technology, running on two cylinders on a light throttle load or when coasting.

The stop-start systems can also switch off the engine when coasting as well as when stopped in traffic.

Audi also offers a new 190hp 2.0 TFSI with a clever combustion process that offers CO2 emissions from 116g/km. Automatic transmissions are fitted with new technology that saves more fuel when coasting, enabling them to equal or better CO2 and fuel economy achieved with manual transmissions.

Other standard features include three-zone climate control, autonomous emergency braking, rear parking sensors and keyless go. Sport models feature standard satellite navigation. Customers can choose to upgrade to Audi’s virtual cockpit system, which does away with conventional instruments and contains all the information within a screen with different configuration options.

The A4 is the latest car to undergo renewal in a sector where the leading vehicles are still fresh. The Mercedes-Benz C-Class was launched just over a year ago; the BMW 3 Series has just had a mid-life facelift and we’re just starting to see the new Jaguar XE appear on the road.

While the old A4 suffered from too firm a ride, this one feels much more compliant, while the reduced weight gives it a much more nimble feel on twisty roads.

Interior quality is the new class benchmark, while refinement and noise suppression are excellent. The new A4 is perhaps the most competitive it has ever been.

At 480 litres, the A4’s boot is identical in size to that of the BMW 3 Series and 45 litres bigger than the Mercedes-Benz C-Class.

Sister brand Volvo’s concept car is made a reality, but it won’t be sold through dealerships