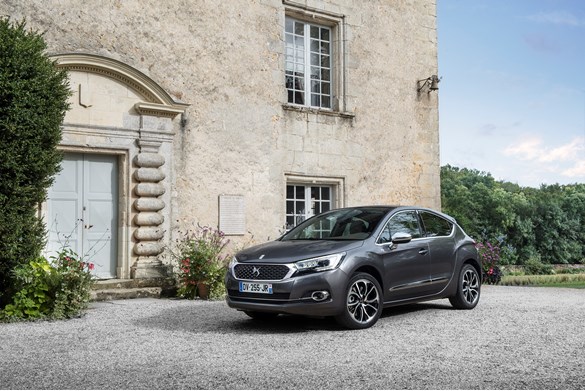 Latest versions of a French luxury hatchback model range will cost up to £1,800 less to buy when they go into the showrooms next month.

Despite boasting more dramatic styling, increased comfort and better levels of equipment, 2016 model year DS 4 cars are being repositioned to offer higher value to UK buyers as part of a campaign to drive the brand upmarket.

“We are able to do this because our three-year/30,000-mile average residual value (RV) figure of 28% has been raised to 31.5% on the latest range,” UK product manager Alastair Fairgrieve told Fleet News. “As well as being good news for our customers, it’s also good for us as we work to build a brand that is perceived to be of higher value.

“We believe stronger RVs will make us a premium proposition in future.”

In an interview at the media launch of the facelifted range, Fairgrieve said the move was also designed to put an end to deposit contribution deals. “In the past, DS 4 customers have been able to get big reductions in the showrooms but we want to get away from discounting to achieve greater credibility in our list pricing,” he said. “This is what is guiding the strategy we have with residuals and commercial support for our cars.”

Launched under the Citroën banner in 2011, the C-segment car has achieved 13,500 registrations to-date in the UK. So far this year, sales have reached 2,500 units and the revised car – the second model to be introduced since DS became a standalone brand 15 months ago – with its price adjustment, is expected to increase showroom traffic.

A conservative volume of 3,000 units has been set for 2016, but a further 1,000 registrations are expected next year following the introduction in January of the DS 4 Crossback, an alternative version with a 30mm increase in ride height, wheel arch trims, black finish spoilers and door mirrors and grey roof rails. Spoilers also feature changes to promote added versatility and lifestyle appeal.

Though it accounts for more than 75% of UK registrations, the 100g/km CO2, 74mpg BlueHDi 120 was not available for testing.

However, with realigned pricing and reduced benefit-in-kind tax liability, the top-specification THP 210 petrol model we tried is expected to find favour with the lower-mileage business user.

Pitched to appeal as an alternative to the Audi A3 S-line, Volvo R Design Nav and BMW 1 Series M Sport, the 210 is the top-performing DS 4 and, at 138g/km CO2 emissions, it offers good efficiency for a car capable of a benchmark acceleration time of less than eight seconds.

Available only in Prestige trim, it stands on 18-inch wheels, has leather upholstery and its restyled front end uses a total of 84 LED units for directional headlights, fog lamps and scrolling indicators.

Following the success of the customisation programme launched with the popular DS 3 hatchback five years ago, models in the new compact range can be ordered with two-tone paintwork in four shades for the roof, rear spoiler, door mirrors and hub caps that allow 38 combinations. DS officials claim the option is unique in the premium compact segment and will allow customers to adapt their car to their personality.

Underlining its high-tech appeal, the DS 4 is the first PSA Group vehicle to feature CarPlay compatibility with most recent Apple iPhones and makes every vehicle function available via a new seven-inch colour touchscreen. Intuitive to use, the system includes mirror-screen technology to transfer smartphone information to the screen and has also allowed interior designers to remove a total of 12 buttons from the centre console to achieve a smoother, less cluttered appearance.

Using slightly lower suspension settings than its predecessor, the revised model provides relaxed and comfortable progress over motorways and main routes, but the firm, well-controlled ride also allows the car to retain its composure when it is hustled through the twist and turns of minor roads.

With maximum torque coming on stream at only 1,500 revs, the 210 motor is quick to pick up pace in intermediate ratios and pulls strongly from low speeds in top gear.
Just as with the recent launch of the DS 5 model, company officials make much of the origins of the DS 4, which gives a nod in its styling to the chic Citroën DS of the 1950s. And while it doesn’t feature that car’s ‘magic carpet’ ride, the DS 4 does provide the driver and front passenger with all the convenience features that make light of long journeys.

But facelift action on the car has not included making changes to the rakish, coupé-shaped body-work, which features rear doors with fixed windows and a sloping roof that offers only limited rear headroom.

“The premium C-segment has changed a lot in recent years and our view is that customers are now looking for more dynamic vehicles,” said Fairgrieve. “What we’re offering is dynamic and – because it’s French – different. We think our car exemplifies French luxury.”