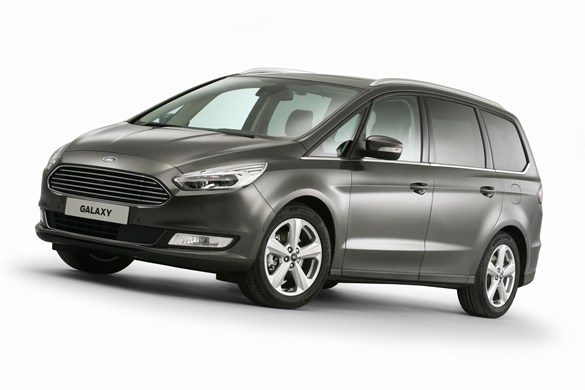 Debate might rage over which car manufacturer was first to produce a people carrier or MPV but Ford could be justified in claiming the largest range of options. Including van-derived options, customers can choose from eight models in the ‘Max’ and Tourneo families, as well as the Galaxy.

The Galaxy was Ford’s first MPV and, while the original model was a joint project with Volkswagen, the second-generation and the new model share underpinnings with the Mondeo. So following the launch of the latest Mondeo in 2014, the third-generation Galaxy arrives on the market.

Perhaps less of a user-chooser car than the more driver-focused and less roomy S-Max, the Galaxy has been a mainstay of private hire taxi fleets (in mid-grade models) as well as an alternative to premium cars for company car drivers who really need space for up to seven in private use.

New suspension components give the latest model improved ride comfort, while the power steering has been switched to electric to allow for a range of automated features to be specified.

New engines offer reduced CO2 emissions, particularly on the top 210hp 2.0 bi-turbo TDCi (144g/km), although the car we tried was the 150hp 2.0 TDCI, which at 129g/km will be far more common. Ford is also offering an all-wheel drive option on some engines.

The practical aspects of the Galaxy are now easier to use. Buttons inside the tailgate can lower second and third row seats, creating a completely flat load area. While the second row seats can be raised again by opening the rear passenger doors and doing the job manually, the harder-to-access third row seats can be put back automatically using the buttons that lower them.

Headroom is increased compared with the outgoing model for second and third-row passengers, and Ford says retaining the traditional hinged rear passenger doors rather than introducing sliding ones helps maintain good shoulder and elbow room.

The Galaxy is offered with new safety features, including an intelligent speed limiter that can recognise reduced speed zones lower than the limit set and slow down accordingly, autonomous braking with pedestrian detection, glare-free main-beam technology, and a front split-view camera for use at junctions.

There are also some assisted parking features where the car can steer itself into parking spaces, whether parallel or perpendicular, and an alert that detects approaching vehicles when reversing out of a space.

The Galaxy is a decent driving companion too, with impressive refinement, and it doesn’t feel too big. It still might not be as sharp as an S-Max, but it certainly has the edge over every other large MPV and its interior wouldn’t look out of place on a premium badge car.