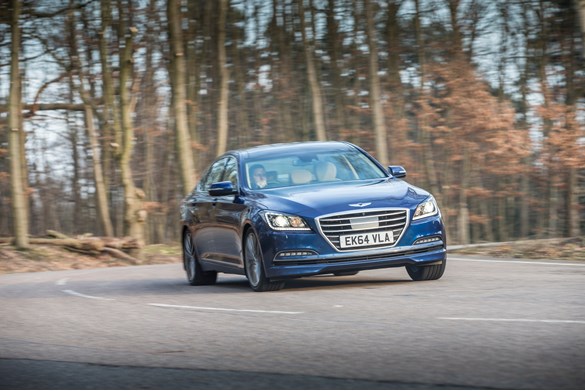 Before we start, we perhaps ought to establish one fact. This is not a fleet car, or one with which Hyundai is planning to boost its UK sales.

Designed primarily for North American customers, the rear-wheel drive Genesis – somewhere between a BMW 5 Series and BMW 7 Series in size – has arrived in the UK with an objective of changing perceptions about the brand.

No doubt the Korean Embassy might be interested, and perhaps a few dealer principles. Then there might be a few well-off Hyundai customers who on seeing the car at selected dealers where it’s available, could decide it’s what they want.

The Korean manufacturer has brought a range-topping saloon to the UK before.

The Genesis is different. While those earlier models felt like a typical Hyundai scaled up to the dimensions of a large saloon, the Genesis feels as much of a premium car as a BMW or Mercedes-Benz.

One version is available, and it comes with a 311hp 3.8-litre V6 petrol engine, mated to an eight-speed ZF automatic gearbox. It is priced at £48,005 on the road, which seems a lot to pay for a Hyundai, but for a German saloon of this size and with this level of equipment, you’d be looking at paying closer to £60,000.

On that basis, although depreciation is heavy, it is probably competitive with premium German cars.

The Genesis isn’t really trying to steal sales from German premium cars. It’s more of a statement of what Hyundai – one of the five biggest car manufacturers in the world – is capable of, and a little about what we can expect from its future mainstream models.

The driver gets a head-up display ensuring he or she can read vital information or navigation instructions without having to look away from the road.

There are three driving modes – normal, eco and sport – giving drivers a choice on how the car responds by altering the electronically controlled air suspension.

Although even the stiffer setting of ‘sport’ mode, while making the car feel a bit more nimble and stable, doesn’t encourage you to maintain it for long periods.

But the Genesis is a little too big for gung-ho driving and it doesn’t suit the car’s character. The front engine/rear-wheel drive configuration benefits weight distribution, aiding precision and smoother driving, but its handling is safe and secure rather than entertaining.

The Genesis does offer exceptional comfort and refinement. The 3.8-litre engine is barely audible and the eight-speed automatic transmission shifts almost imperceptibly.

Although maximum torque of 293lb-ft is reached at 5,000rpm, around 90% of it is available from just 2,000rpm, so combined with the eight-speed transmission the Genesis never feels short of acceleration.

Official combined fuel economy figure of 25.2mpg doesn’t sound impressive, especially as its 12.5mpg lower than the similar powered BMW 535i (an equally rare car on UK roads these days). But during several hundred miles of driving, we managed to do slightly better than that, and perhaps it’s a rare case of the official fuel consumption test in the lab being easy to replicate in everyday driving.

There is no diesel variant, which is a little disappointing. Hyundai would probably need to develop a suitable unit for Europe if it ever wanted to launch a diesel version, although the engine in the Santa Fe is perhaps almost up to the task of powering a car as special as this one.