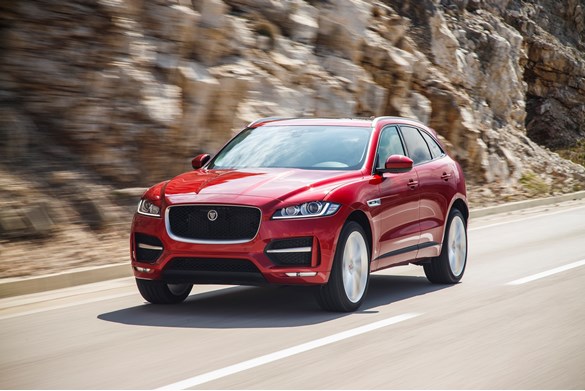 Almost every car manufacturer has an SUV these days. Even those famous for sports cars and luxury saloons.

Porsche launched the Cayenne more than 10 years ago and its SUV sales soon outnumbered those of the 911 and Boxster. Porsche has since added another SUV model to its range, while Maserati and Bentley will launch 4x4 models in 2016. Aston Martin and Rolls-Royce are also developing versions for their ranges.

Jaguar’s F-Pace will be more accessible, and is perhaps one of the most eagerly anticipated.

With Jaguar’s sister brand, Land Rover, only producing SUVs, it’s important that the F-Pace has a clearly defined purpose that won’t hurt sales of the UK’s most popular 4x4s.

So the F-Pace is being marketed as a ‘practical sports car’, as well as an SUV, and has less all-terrain ability than similar sized Land Rovers.

But it should at least be the equal of its main rivals, which include the Audi Q5, BMW X3, Mercedes-Benz GLC-Class and Porsche Macan.

It’s also slightly larger than those cars and probably the most practical choice in this class, with Jaguar pointing out that it has more usable boot volume (but not more in outright litres) than the BMW X5.

The F-Pace is available with three engines in the UK, and the entry-level rear-wheel drive manual expected to offer significant corporate sector appeal with CO2 emissions of 129g/km.

It’s powered by a 180hp version of Jaguar Land Rover’s 2.0-litre four-cylinder engine that made its debut in the XE in 2015. All other versions of the F-Pace in the UK have an all-wheel drive layout, with the 2.0-litre offered as a six-speed manual in standard form, or with an optional eight-speed auto.

Equipment grades reflect those of the XF saloon, with the mid-grade Prestige as the starting point to the range, and offering customers the option of upgrading to the more aggressively styled R-Sport, or the more luxurious Portfolio.

The range-topping S is offered either in a supercharged 380hp 3.0-litre V6 petrol engine, or a 300hp Ford-PSA-sourced 3.0-litre V6 diesel.

Portfolio models come without the R-Sport’s styling kit, but have upgraded leather seats, power-folding auto-dimming exterior mirrors with a Jaguar signature in the approach lamps, rear-view camera and a Meridian audio system.

S models are based on the R-Sport, with further styling upgrades, including 20-inch wheels, a higher performance brakes, plus the rear-view camera and Meridian audio system.

An initial high-specification First Edition has also been offered on the V6 diesel variant, with features that would usually be optional as standard, and a near £14,000 premium.

Interiors have a simple, elegant design, and are close to the best in class for quality.

Jaguar expects the most popular derivative to be the 2.0 AWD R-Sport auto.

The V6 diesel is probably the optimum combination of performance and efficiency in the F-Pace, although the 2.0-litre diesel is no slacker when it comes to acceleration, and it also feels more agile in corners thanks to its lower weight.

The F-Pace is built from a high proportion of aluminium, so it’s relatively light, and aerodynamic performance is pretty close to what you’d expect for a conventional estate car at 0.34 Cd. This all helps fuel efficiency, with official combined fuel consumption of 57.7 for the rear-wheel drive version, and 53.3 for the all-wheel drive auto we drove.

The four-cylinder engine is hushed at steady speeds, although makes itself heard under hard acceleration. The F-Pace offers a more composed ride than rivals – it was engineered from the outset to run on optional 22-inch wheels, so those with smaller diameter wheels do an even better job of cosseting passengers.

The F-Pace is a game-changer for Jaguar, perhaps not quite that for the SUV market. But it will undoubtedly be popular, and globally could become the best-selling Jaguar to date.