"We see a desire for change – now there is a credible alternative to the German premium cars." 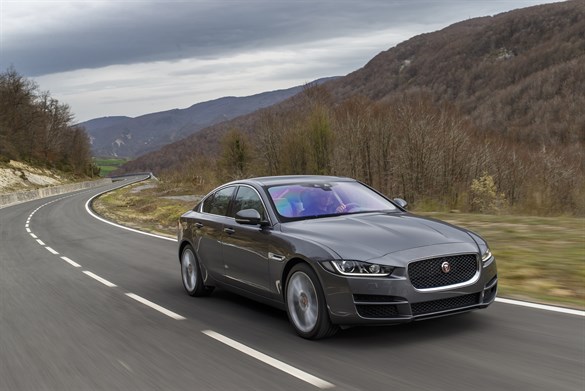 It’s been one of the most protracted launches ever. First there was the international reveal in September; a strategy day on engine technology in December; and a drive of a prototype model in January.

Now, finally, we have the launch proper. Well, almost – there was still no 2.0-litre 163hp 99g/km Ingenium diesel to drive, despite that model being a major attraction for fleets when the XE is available in June.

Instead, we were provided with the more powerful 180hp diesel which, at 109g/km (auto and manual are the same), sits two BIK bands higher and returns 67.3mpg. Jaguar believes fleet drivers will be split between the two engines, weighted 60-40 in favour of the 99g/km, 75mpg option.

The 180hp costs £500 more, starting at £30,275, but is expected to attract a higher residual value of between £200-300. Over a four-year/80,000-mile contract it will sip slightly more fuel, costing an additional £700 at current prices; consequently, the total cost of ownership will not be much higher.

To be successful among the BMWs, Audis and Mercedes – each of which has enjoyed unprecedented success in the corporate sector over the past five years – Jaguar needs to offer something special. Undoubtedly it will pick up sales from those simply looking for ‘something different’.

But to make a real impact – at a level that will see Jaguar achieve its aspiration of doubling UK sales to 36,000 (XE: 15,000-20,000, 60% to fleets) – the XE needs to move the game on in terms of emissions/efficiency, driver experience and technology, both safety and infotainment related. And be competitive on wholelife costs.

On efficiency, it is the clear market leader: the official combined figures tell their own story, but Jaguar executives claim real-world driving by their own staff has seen the 163hp diesel up above 70mpg mark.

The XE comes with a number of safety technologies as standard, including autonomous braking, while making its debut is all-surface progress control which improves grip in snow, often a criticism of rear-wheel drive cars. Jaguar expects the XE to achieve a five-star EuroNCAP rating.

Together with a front end design which reduces the chance of headlamps smashing in a collision, the safety package is sufficient for the car to receive an insurance rating of 22E (163hp version), well below its rivals. It could reduce insurance premiums by several hundred pounds.

The XE is Jaguar’s most connected car yet, with smartphone apps and wi-fi via its touchscreen InControl infotainment system.

InControl responds to voice commands while a remote option connects drivers to the car from anywhere in the world via a specially-designed app. It enables a range of functions, from checking fuel levels and locking the doors to pre-setting the climate control system.

To drive, the diesel is responsive and refined: it’s eager to push on and is suited to the eight-speed automatic gearbox that is a hand-me-down from the XF.

Handling is direct and well-weighted; ride is firm but not jarring – the suspension has been engineered, says Jaguar, to sit at a mid-point between sporty and comfort in the segment. The car feels sure-footed at all times, ensuring an effortless drive over the two-day 500km route.

Jaguar claims its designers have put as much thought to the interior design as they have exterior, which used the F-Type as its template. The cabin features the ‘riva hoop’ line sweeping round the dashboard, with instrument binnacle and steering wheel lifted from the F-Type. The central design is functional rather than flashy, but clearly premium in look and feel.

One criticism is the lack of legroom in the back when the front-seat occupants are six-footers. However, boot space is good, at 450 litres. An estate version is on the design board but Jaguar has yet to make the case financially. While estates are popular in the UK, they are less so elsewhere.

Four trim grades are available: SE, Prestige, R-Sport and Portfolio. R-Sport will account for 40% of fleet volume, according to Jaguar UK product planning manager Damian Lawton, and starts at £32,025. Add £1,750 for the automatic.

Service intervals are 21,000 while two five-year service packs are available, both including AdBlue top ups: a 50,000-mile plan at £475 and a 75,000-mile plan at £659. Jaguar expects a high take-up from fleets, particularly as the plans are transferrable to the next owner so are likely to be rewarded by a higher residual value.

The majority of customers will be conquests, primarily from the German brands but also from upper mainstream brands like Volkswagen and Ford.

“We had received feedback from user-choosers that they wanted an XF but it was out of their band,” Lawton said. “So we know there would be demand for a car that sat lower down the range.

“We see a desire for change – now there is a credible alternative to the German premium cars.”

Facelifted car is now battle-ready for the new 3 Series

The infotainment system allows you to personalise a number of the car’s characteristics, such as driving mode, efficiency assist and interior lighting.

Fleet Poll
How would you like to see roads policing improved?
Vote
View all