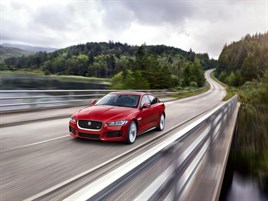 While unveiling a global fleet strategy, the manufacturer admitted that in the past both Jaguar and Land Rover had been more focused on retail than fleet and business, but now saw an opportunity to ‘rebalance’ its sales and limit its exposure to economic downturns.

It has invested in weight-saving aluminium construction for more models and built a new engine plant producing four-cylinder petrol and diesel engines, which reduces its dependence on Ford and PSA.

Ken Forbes, global fleet and business director at JLR, said: “We need to ensure we operate in both markets. Globally, fleet accounts for around 50% of sales.”

JLR is seeking to increase its global fleet sales from 16% to circa 25% of total volume (see fleetnews.co.uk/jlrfleetsales).

Forbes said that during difficult economic times, the retail car market falls more rapidly than fleet and a stronger presence in the corporate sector would help reduce its risk.

“We want to rebalance volume with more fleet and  business sales and seek to maximise residual values,” he said.

He said there had been a perception that Jaguars are “too expensive” and now the company was seeking to establish leadership at certain price points and best-in-class leasing rates. It is also seeking to ensure communication and marketing would illustrate a competitive proposition against German rival models.

The company already points to positive RV forecasts from CAP Gold Book for the Jaguar XE, which will begin to arrive with customers late spring 2015, but it will also need to demonstrate its long-term commitment to ensuring RVs remain strong if it wants long-term fleet business.

Chris Newitt, sales director at JLR, said contract hire fleets will welcome strong propositions such as the XE because it would help reduce the residual value risk of a high volume of rival products on their fleets.

But he added that some short-cycle business would also be key to ensuring the cars gain visibility on UK roads.

“We will make sure that the short-term business for XE and Discovery Sport never goes above 20% of the next year’s volume. We will not chase volume with our fleet and business sales.

“The contract hire and leasing market is now very wary indeed of premium manufacturers overpushing volumes and damaging RVs as a result. We are committed to exclusivity – and will bring stability as a result.”

Essentially, as service intervals are 21,000 miles, it means some fleets will need to pay for additional servicing for high-mileage cars, but it fixes SMR costs for the first few years of a fleet lifecycle.

The XE will offer CO2 emissions from 99g/km using a new family of engines, while later in 2015 the Discovery Sport will have a front-wheel drive version with CO2 from 119g/km.

JLR will also be consulting contract hire companies, RV influencers and some large fleets to inform on specification of future products.

The dealer network has 50 business specialists who  will target local SMEs and user-choosers, and have service level agreements to ensure they meet expectations of  fleet customers.

Forbes added: “Total cost of ownership is now part of our product planning. And if you get these things right in fleet, retail will follow.”