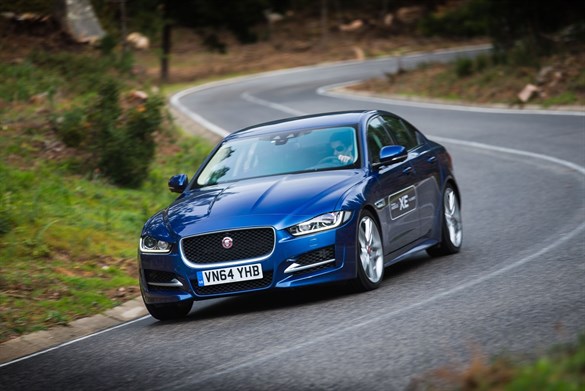 It’s easy to dismiss the Jaguar X-Type as a failure. With styling that harked back to the 1960s, and frequently derided by presenters of a long-running light-entertainment programme on BBC television as being “a Ford Mondeo”, perhaps it was just as well that there was no replacement model at the end of its life in 2010.

Unfulfilled potential, maybe. The result of Ford (which owned Jaguar at the time) imposing a platform on the company that then restricted the engineering and design potential.

But the X-Type has been the biggest selling Jaguar to date with around 350,000 cars sold worldwide.

A line was drawn under that chapter in Jaguar’s history, and with investment from new owner Tata, the company has been gaining momentum.

But as Mercedes-Benz has learned in recent years, to seek sustainable growth in sales, the range needs to have smaller products and the company has to have a strong fleet strategy.

The XE revisits the sector of the market vacated by the X-Type five years ago. But this time, with no donor platform the XE started with a blank sheet of paper. It would be rear-wheel drive and require a new generation of engines as Jaguar Land Rover weans itself off being an engine customer of Ford.

First to be ready is the new 2.0-litre diesel – key for corporate customers – and available with a choice of 163hp or 180hp outputs. The manual 163hp XE has sector-best CO2 emissions for a non-hybrid at 99g/km, although the prototypes available to us were 180hp models fitted with the ZF eight-speed automatic gearbox.

All diesel variants will be important to fleet buyers, and this 180hp auto R-Sport with CO2 emissions of 111g/km is competitive with rivals from BMW, Audi and Mercedes-Benz.

The car was also very well finished for a prototype. The only telltale sign was a giant red kill-switch button over a cup-holder on the centre console, to stop the engine in case of emergency.

Fortunately there were none, and the car provided an effortless couple of hours on the road. The new electric power steering system provides sufficient feel as well as Jaguar’s famed ‘cat-like reflexes’, and has been chosen because of its reduced fuel use compared with a hydraulic set-up and the ease with which it can be integrated with autonomous safety and convenience features.

All XEs come with leather seats and satellite navigation as standard, as well as other key features, and early indications show it will have an edge over rivals on equipment.

The diesel we tried has standard springs, and easily offered class-leading ride comfort. The XE’s stiff body inherently helps ride comfort and has also allowed Jaguar to ensure the car can match for driving enjoyment. The result is a smooth, forgiving and surefooted car that is very enjoyable to drive.

So the XE banishes the X-Type to distant memories. Well, almost: it was revealed that there are three common components between the two cars. But as it’s just two screws and a rubber grommet, it’s unlikely to affect the driving and ownership experience.