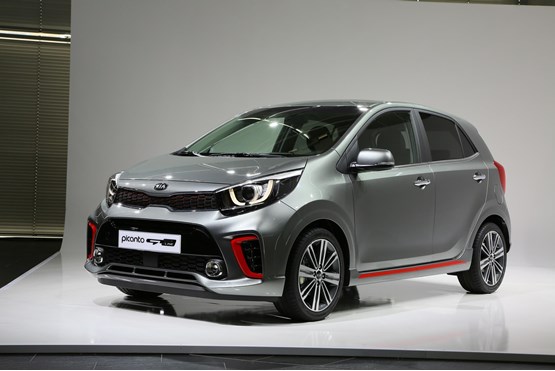 The launch of the Picanto in 2004 was the first evidence of Kia’s move from being a budget to a mainstream car manufacturer.

Three years before the launch of the Europe-built Ceed, the Picanto showed that in the price-conscious city car (A-sector), it could produce a model that was more practical than a Ford Ka and had more pleasing looks and driver appeal than a Vauxhall Agila.

The second-generation Picanto, with sharper looks and improved quality, had even broader appeal. Now this third-generation car, launched in April, is even more distinctive, especially when chosen with the new GT Line top equipment grade with red accents in the styling kit.

The Picanto looks similar to its predecessor, but benefits from bolder styling. Its wheelbase is slightly longer so it’s roomier inside and, despite being the same overall length, the new Picanto has a bigger boot – 255 litres minimum.

The interior is neat, modern and simple, with a seven-inch touchscreen in the dashboard centre on higher-grade models, moving some of the controls closer to the driver’s line of vision. There are hard plastics on the doors and dashboard as is common in the city car sector, and the Picanto feels every bit as robust inside as a Volkswagen Up.

Step up to 3 for standard autonomous emergency braking, automatic air conditioning, cruise control with a speed limiter, a seven-inch dashboard-mounted touchscreen with sat-nav and full connectivity, Bluetooth with voice recognition, digital radio, a rear parking camera and sensors, and chromed exterior door handles. AEB is an option on the lower grades.

GT Line adds the exterior styling kit, but does without the dashboard touchscreen, while the GT Line S includes the screen with sat-nav as well as a wireless phone charger.

We spent most time in the 67PS 1.0-litre, which is the most frugal of the engines on offer, and likely pool car material. It would work well in urban areas, but struggles to maintain momentum heading into the hills at higher speeds.

If regular high-speed driving is likely, the 84PS 1.2-litre might work out just as cheap on fuel in the real world, as it would be working less hard than the 1.0-litre.

New to the Picanto, but not available until later in the year, is a turbocharged version of the 1.0-litre engine – the 100PS 1.0 T-GDI. This would certainly give the new GT Line cars the performance to match their looks.