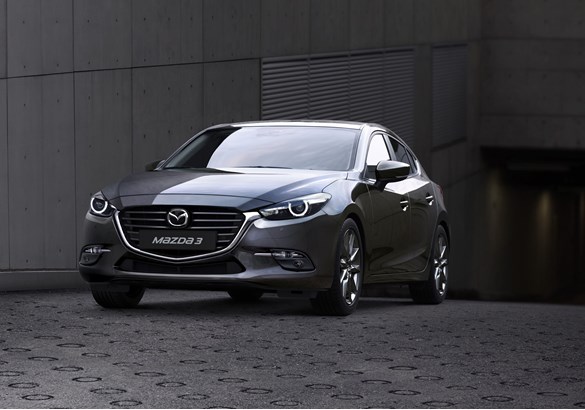 Some car manufacturers describe facelifts in rather dramatic terms. Often we are told a car is a ‘new generation’ three years into its lifecycle, and it can be difficult to discern differences from outward appearances.

Nowhere in the maker’s press material does it claim the Mazda3 is undergoing a facelift, although it would be quite understandable to expect one since the car was launched early in 2014.

Instead we have the 2017 Mazda3, with some subtle styling changes, interior enhancements and a few engineering tweaks, too.

It isn’t that long since we tried the Mazda3 – the new 105hp 1.5-litre diesel spent a week with us earlier in the year.

But both that and the 2.2-litre diesel benefit from changes for 2017. Technology Mazda calls ‘transient control’ works to eliminate turbo lag, and deliver a sharper, more consistent response from the engine under acceleration.

The interior updates give the Mazda3 a better quality feel, although the new surround for the base of the dashboard screen, intended to give it a more integrated appearance has created a counter-productive ‘bolt-on’ look.

The Mazda3 is still at its most impressive on the move, with smooth, assured performance from the 2.2-litre diesel, delivering strong acceleration in hushed surroundings.

Intuitive steering feel and sharp responses deliver one of the most enjoyable driving experiences in a car of this type, but not at the expense of a forgiving ride.

We’ve come to expect involving driving experiences from Mazda passenger cars in the past 15 years, and the latest incarnation of the Mazda3 does so with few compromises.

It’s worth noting that the four-door ‘Fastback’, which accounts for around 20% of UK sales, has lower CO2 emissions than the hatchback when fitted with the 2.2-litre engine, coming in at 104g/km instead of 107g/km. And, given that there’s no price difference between the two, there would be a strong case for choosing the Fastback over the hatchback as a company car in saving the driver on benefit-in-kind (BIK) tax and the company on Class 1A national insurance contributions. The downside is slightly more depreciation for the saloon (£300 lower, according to our data at four years/80,000 miles), as medium hatchbacks tend to be more desirable used cars.

It might compete in a crowded and talented sector (we believe there are around 30 lower-medium hatchback choices), but the Mazda3 still has much to commend it.