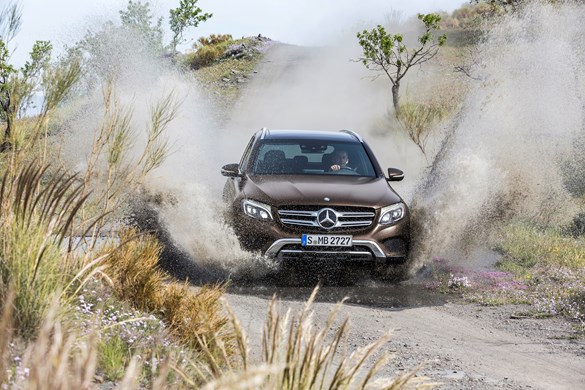 Rather like a reveller turning up to a New Year’s Eve gathering at 12.15am, Mercedes-Benz is late to the medium-sized premium SUV party.

Until the launch of its new GLC, the manufacturer had been a notable absentee in the sector in the UK, as engineering complexities meant it was uneconomical to convert its predecessor, the GLK, to right-hand drive.

In the manufacturer’s absence, rivals such as the BMW X3, Audi Q5 and Land Rover Discovery Sport (which is now available with Jaguar Land Rover’s new Ingenium diesel engines) have been able to gain a stranglehold in the sector.

However, fortunately for Mercedes-Benz, this party is still in full swing, with growth in the segment showing no sign of slowing down.

The GLC, which uses Mercedes-Benz’s 4matic permanent all-wheel drive system, is based on the C-Class platform, while both front and rear overhangs are shortened to increase its off-road ability: this increases the steepness of slopes the vehicle can climb or descend.

The short overhangs also contribute to the car’s good looks. The manufacturer has moved away from the squarer, more rugged look of past Mercedes-Benz SUVs for a curvier, sportier shape.

This sleeker silhouette doesn’t compromise its practicality. However, although the GLC is available only as a five-seater (the Discovery Sport can have seven seats), there is plenty of room for all occupants, with headroom and legroom both particularly generous.

As well as its platform, the GLC also shares many of its cabin fittings with the current C-Class. This gives the interior a high-quality appearance, with a seven-inch touchscreen taking a prominent position at the top of the centre console: it feels a luxurious place to be.

No EuroNCAP rating is available yet, but standard safety equipment includes electronic stability control with crosswind assist, autonomous braking which reduces speed if a collision is imminent, and attention assist, which continuously analyses driver behaviour and steering movements. If patterns are recognised which characterise drowsiness, an audible warning is sounded and the driver is prompted to take a break.

In the UK, the GLC range is available with two engine options: a 2.1-litre diesel with either 170hp in the GLC 220d, or with another 34hp in the GLC 250d for £1,000 more. Both have a new nine-speed automatic gearbox.Efficiency figures are identical: official combined fuel economy is 56.5mpg with CO2 emissions of 129g/km – up to 19% more efficient than the GLK, the GLC’s  predecessor.

As well as the upgraded powertrain, Mercedes-Benz says the gain in efficiency is also due to the increased use of ultra-high-strength steels and aluminium in the GLC’s structure which means it weighs an average of 80kg less than its predecessor.

UK models will be fitted with adaptive dampers and steel springs as standard, but our test models were fitted with the manufacturer’s optional £1,495 air suspension, providing a comfortable ride over the test route. The GLC’s overall refinement was exceptional: wind and road noise were minimal. The automatic gearbox provided barely detectable gearshifts, while performance from the 170hp engine ensured swift progress.

Mercedes-Benz may have given its rivals a headstart in the medium-sized premium SUV sector, but the GLC has the right mix of quality, comfort and sophistication to make up for lost time.