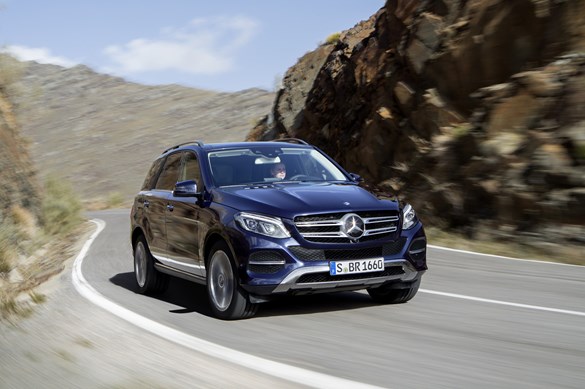 Improved styling and greater luxury are poised to help Mercedes-Benz step up its bid to loosen the grip of Audi, BMW and Range Rover on the UK market for large sport utility vehicles.

But the premium manufacturer is also preparing to focus on improvements in operating efficiency to attract more corporate customers to the GLE, the renamed next-generation version of the chunky M-Class SUV due to go on sale in September.

“Every fleet operator has an interest in raising efficiency levels and our new car reflects this. We are confident that we can appeal to a broader range of company car buyers than ever before,” said Mercedes-Benz UK head of fleet Sally Dennis.

“With better engines and a new nine-speed automatic gearbox on diesel models, we now have one of the widest spreads of SUV cars on offer,” she told Fleet News.

Improvements of 17% are being claimed in emissions and economy for the revised 2.1-litre, four cylinder engine in the 250d, the lead-in variant that has been most popular with UK buyers since the M-Class was launched in 1997.

Expected to account for two-thirds of the 5,000 units likely to be registered in the next 12 months, the car combines a tailpipe figure of 155g/km with 47.9mpg economy, a performance that moves it closer to the  154g/km and 48.7mpg efficiency figures of BMW’s popular X5 XDrive 25d.

With it comes a freshened and smoother appearance including a new front grille and changes to headlights, bumpers, bonnet and wings, complemented by a revised tailgate and rear lamp cluster. It results in bodywork that is slightly longer and wider.

Inside remains largely unchanged, but a more prominent media display is now partially integrated in the dashboard, which has fresh trim finishers and uses silver surrounds for air vents and an upgraded infotainment system includes access to a wide range of Mercedes Connect Me services.

Equipment is generous and includes a park assist system with reversing camera, push button starting, heated front seats, a multi-control touchpad, privacy glass and a powered tailgate. A choice in driving dynamics is provided by Dynamic Select, a handling control system operated by the turn of a large knob on the centre console that offers ‘comfort’, ‘slippery’, ‘sport’ or ‘individual’ settings.

The modes oversee chassis, steering and powertrain adjustments of the steel spring suspension of the standard car, which was not available at the launch event. But the sport setting works best with the air suspension that comes as part of an off-road package.

Costing £1,985, this option is designed to boost the standard vehicle’s capabilities in off-road conditions with the 4Matic all-drive system that copes with most traction needs with 50-50 torque distribution between front and rear axles.

Over the twisty roads of our Alpine test route, the option package soon proved to be a viable aid to the car’s behaviour on the tarmac. While ride characteristics are too soft to cope with the demands of press-on driving in the comfort setting, switching to sport immediately tidies up most of the body movements and offers the extra stability needed to provide a bulky car with relatively nimble handling combined with smooth progress over rough surfaces.

Fitted with an even lower first gear, the GLE is now better able to get heavy towing loads on the move on steep inclines, but the higher top ratio of its new transmission makes a sizable contribution to the improvement in economy over the current car.

Eighth ratio doesn’t engage until the car reaches 60mph and the G-Tronic unit refuses to move into the ninth slot at less than 75mph. So the provision of such a high ratio – it equals 50mph per 1,000 revs – allows the new model to punch well above its weight as a mile-muncher that nonetheless has a remarkably relaxed demeanour during high speed cruising.

Volvo’s drive for electrification has led it to introduce mild hybrid powertrains across its range to improve efficiency.