"User-choosers taking to the S-Class’s helm will be more concerned about the new engines." 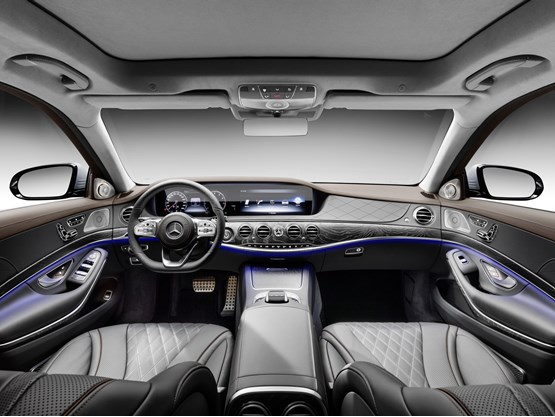 For years the S-Class has been Mercedes-Benz’s technological tour de force, the test bed for all the technology that eventually trickled down into the rest of the range.

This time around the ‘new’ S-Class is the result of a mid-life redesign and actually sees some 'trickle up' – if such a thing were possible – of equipment already seen in its E-Class sibling.

Mercedes-Benz’s semi-autonomous steering assistance – which will not only maintain the S-Class’s course between the white lines but will swap lanes with the flick of an indicator – and the 12.3-inch HD dashboard display screens in place of conventional dials, are both familiar from the E-Class.

Less familiar is the mesmerising technology of the Driver Assistance Package which sees the adaptive cruise control system not only maintain a set distance from a car in front, but draw on sat-nav data to adjust speed and gearing to changes of speed limit, junctions and stop-start traffic.

A new smartphone app also enables S-Class drivers to park their car in a tight spot while outside the vehicle, making access possible in the tightest of spaces.

In specifications equipped with Magic Ride Control an on-board camera system will keep an eye on the road ahead and adjust the suspension to the prevailing conditions.

Introduced in 2013, the system – standard on the S 63 AMG – now functions at up to 112mph and will tilt the car 2.65-deg into a bend to reduce lateral forces on passengers.

Interior comfort is improved by the introduction of 'energising comfort control', a combination of fragrances delivered via the climate control system, ambient lighting, the heating or cooling effects of massaging seats and some pre-installed music to set one of six moods.

Down-filled pillows add to the sense of opulence enjoyed by rear seat passengers.

User-choosers taking to the S-Class’s helm will be more concerned about the new engines.

The S 400d 4Matic’s 334PS engine is the most powerful series production diesel engine ever offered by Mercedes-Benz and claims 42mpg and 147g/km.

Less appealing to fleet users is the S 560 4Matic’s 4.0-litre, biturbo V8 petrol which, despite featuring cylinder deactivation tech, delivers the cost of 469PS and 700Nm by way of a 33.2mpg and 195g/km CO2 emissions.

We drove S 560 4Matic and the S 400d 4Matic and found that, while the petrol engine can be worked harder, the powerful turbodiesel offered no real refinement shortfall while its 700Nm of torque provided effortless low rev progress.

While BMW’s 7-Series has the scale, it doesn’t have S-Class levels of luxury and, as Audi prepares to launch a new A8, this feels like an impossibly tough act to follow.

In short, the S-Class still feels the flagship of flagship models.