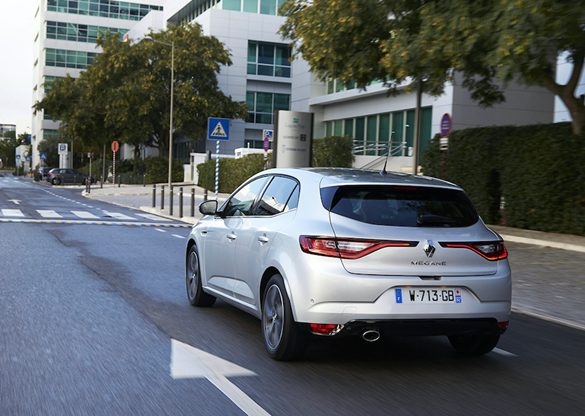 Renault has spent the last few years rebuilding in the UK. At the end of 2010 it announced a major scaling back of model lines and dealers as it had found itself in an unsustainable situation of discounting that had harmed its ability to make a profit.

The company’s performance has been improving, particularly since the Captur was launched almost three years ago, with growth in sales running significantly ahead of the buoyant UK car market.

The Kadjar crossover launched in 2015 was a sign of a new Renault, with bold design and innovative features.

Although that car fills an increasingly important niche for Renault in the medium crossover segment, the vast majority of volume in the C-sector in Europe is from traditional hatchbacks and their four-door and estate derivatives.

It’s 10 years since the Mégane was the second biggest car in this sector in Europe, behind the Volkswagen Golf, and Renault believes that ultimately the new Mégane could recapture that position.

It’s a car that Renault’s UK managing director Ken Ramirez is subtly confident would to return the manufacturer to the mainstream of fleet in the UK.

He said: “Our residual values have been low and that means it’s more expensive for us to do Motability and fleet. The Kadjar has strong residuals, more than 40% , and we are optimistic about the new Mégane.”

Ramirez said the residual values providers would come to a decision in due course, and indicated that the new model could be upwards of 30%. According to KwikCarCost, the current Mégane 1.6 dCi Dynamic Nav hatchback has a forecast of 22% at three years/60,000 miles.

Looking at the Mégane, it’s certainly more distinctive than its predecessor, with its styling injecting a lot more personality into the car.

It has a longer wheelbase than before as well as a wider track, both fundamentals for improved ride and stability. The increased length and width between the wheels has resulted in improved passenger space inside.

The seats feel more luxurious thanks to the use of dual density foam and frames from the larger Espace and Talisman (neither of which are offered in the UK).

The cabin looks more upmarket than before, but a few elements you might find on a premium-badge car are still missing – for example, the metallic-effect trim is clearly plastic from the warm-to-touch feel, and the A-pillars are not fabric covered as they are in some cars.

These aspects of ‘perceived quality’ might well be outweighed by the durability of these cabin components, as we know Renault has been on a mission to improve its performance in this area.

Pricing and specification are yet to be confirmed, as we won’t see the Mégane in the UK until summer 2016, but most engines are carried over from the current model. CO2 emissions will start at 86g/km for the 1.5 dCi diesel, while the 130hp 1.6 dCi we tried has CO2 emissions of 104g/km.

This version has plenty of pulling power with 221lb-ft of torque, and is comfortable and refined, although the ride on our test car was a little on the firm side.

The petrol range includes 100hp and 130hp 1.2 TCe, while we also sampled a new 205hp 1.6 TCe GT, which comes with the seven speed dual-clutch auto as standard as well as four-wheel steering to help agility and stability by turning slightly in the opposite direction to the front wheels at lower speeds and the same direction at higher speeds. It certainly makes a difference on some of the twisty roads of our test route.

Equipment grades will broadly reflect those of the Kadjar, so expect Dynamique S Nav and GT Line to be of most interest to company car drivers.

High-end models will have an upgraded tablet-style navigation screen, while the GT Line will include many of the styling cues inside and out found on the GT.

The Mégane is a significant improvement over its predecessor and its styling will help it get some attention in a crowded sector where there are almost 25 premium and non-premium rivals. We wait to see whether improved running costs will be an additional attraction.