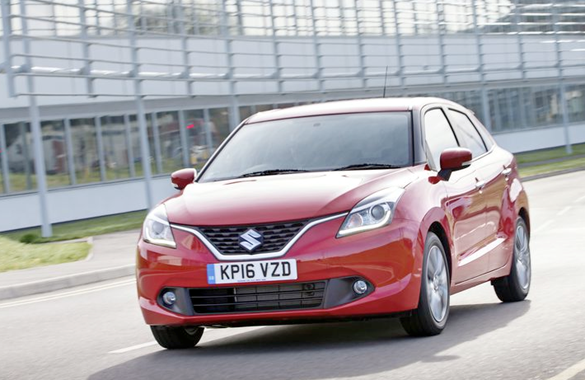 The current Suzuki Swift has been one of the company's most successful cars, still recording UK growth in 2015, despite being in its fifth year.

Although the brand’s total sales fell by almost 8% during 2015, at just under 35,000 units (of which fleet accounted for 8,853), last year was still its second most successful year in the UK. And it has ambitions to reach 50,000 in the next few years, helped by new models and new technology. Next year, it aims to pioneer a new niche with an A-sector crossover. Before that, it is launching the Baleno.

The new model competes in the same B-sector as the Swift, but Suzuki has rationalised this decision by ensuring the Baleno has a different set of attributes. Slightly larger, although still less than four metres long, the Baleno’s pricing starts at the same level as high-grade versions of the Swift.

In the UK, it will be offered with a turbo-charged three-cylinder 1.0-litre engine, producing 111hp, or a 1.2-litre four-cylinder with a (very) mild hybrid system producing 90hp.

Suzuki thinks it will sell 3,500 Balenos in a full year, with around 700 to fleet customers. The 1.0-litre Boosterjet engine is likely to be the biggest seller but, with CO2 emissions of 105g/km for the manual, it’s possible that the 1.2-litre SHVS will have a disproportionately higher number of fleet sales. This will be because of its CO2 emissions of 94g/km – three benefit-in-kind (BIK) tax bands lower and compliant with any business that sets a 100g/km cap.

While the Swift is intended to appeal to a sense of fun – and, according to Suzuki, the more emotive aspects of choosing a vehicle – the Baleno is meant to be a more rational purchase. It’s spacious for a small hatchback and, with 320 litres of luggage space, it’s among the best in its class. It’s well-equipped too, with adaptive cruise control and radar-assisted braking as standard on the SZ5 trim.

The interior is nicely designed and there’s a large dashboard touchscreen. But the dashboard and door panels are all hard plastics and feel less sophisticated.

The hybrid system offers limited assistance when setting off or under strong acceleration, and can regenerate energy on the move, but it was designed to be low-cost and lightweight. It helps with the CO2, and is the only Baleno with stop-start technology.

The peppy 111hp 1.0-litre T feels stronger, but comes with higher BIK tax. That car has a 9,000-mile service interval, compared with the hybrid’s 12,500. RVs are expected to be among the best in this segment.