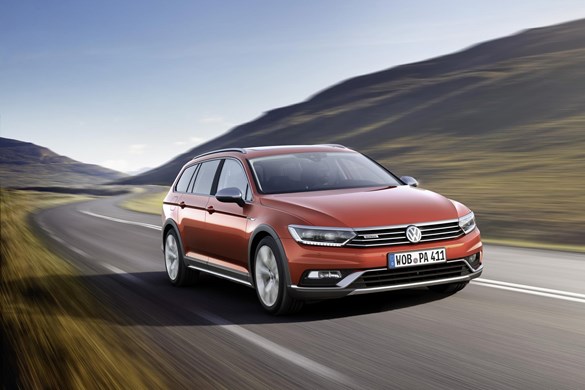 It now seems to be the norm for car manufacturers to have a car that bridges the gap between conventional models and SUVs or crossovers.

And while Volkswagen offers SUVs in the shape of the Touareg and Tiguan, it has a long heritage of introducing four-wheel drive models elsewhere in the range.

The Passat Alltrack is now entering its second incarnation, following the launch of the eighth-generation Passat in 2014.

The first Passat Alltrack was launched in 2013, and the Alltrack range has since increased to include a Golf variant.

The new Passat Alltrack offers more of the same: on-demand all-wheel drive thanks to a Haldex coupling that instantaneously sends drive to the rear wheels when required, and 27.5mm extra ground clearance over the Passat estate.

With a number of Volkswagen Group cars following a similar formula, including the Škoda Octavia Scout and Seat Leon X-Perience, as well as the Golf Alltrack, customers for the Passat Alltrack will most likely be user-choosers who want the versatility the car offers for private use, with perhaps also the capability of towing up to 2,200kg.

It puts the Passat up against the Vauxhall Insignia Country Tourer and Subaru Outback on price, specification, appeal and ability.

We didn’t get the opportunity to try the Passat Alltrack off road, although the latest generation Haldex system is familiar to us from the Octavia Scout and Leon X-Perience. And we know it’s pretty seamless in the transfer of torque to the rear axle in a fraction of a second after it detects that the front tyres have started to slip.

On the road, the Alltrack feels very similar to the standard Passat estate. Occupants sit just over an inch higher, and the spacious and comfortable interior insulates them well from the outside world.

Volkswagen thinks the Passat Alltrack will account for around 5% of Passat estate sales, currently the more dominant body style on the Passat range in the UK.

Other variants are available elsewhere in Europe, including Volkswagen’s bi-turbo 2.0-litre diesel, but there are no plans to introduce this or a petrol version in the UK. However,  Volkswagen says interest in alternatives to the two derivatives on sale could see the range broaden in future.