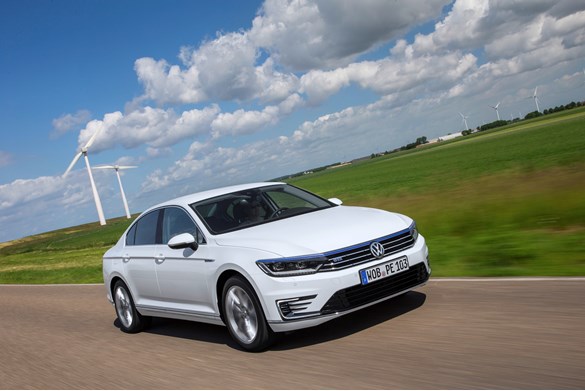 Volkswagen is yet to launch a petrol version of the latest Passat in the UK. The sector it competes in is dominated by fleet sales, and given the size of the Passat and the type of role it has on fleets, demand for petrol versions would be low.

The company is launching a Passat that uses both petrol and electric power in the plug-in hybrid GTE, which could be well suited to urban-based drivers with access to charging points.

The GTE uses the same powertrain as the Golf GTE and Audi A3 E-tron launched earlier this year, but benefits from a little more power. It means that like the Golf GTE, the Passat can travel for up to 30 miles purely on its plug in charge, but has the benefit of a powerful petrol engine and a tank of fuel to eliminate range anxiety.

There are no mainstream rivals at the moment, so the Passat GTE squares off against plug-in hybrid versions of the Mercedes-Benz C-Class, while we also expect to see plug-in versions of the new Audi A4 and the next BMW 3 series.

And the total powertrain output is 218hp (up on the Golf GTE and Audi A3 E-tron’s 204hp) meaning it’s no slouch.

Acceleration from 0-62mph can be achieved in less than eight seconds for both saloon and estate versions.

The Passat has the feel of a luxury car (and so it should commanding a price premium over rival mainstream products), and even the standard cloth seats in the GTE are soft to the touch.

Prices are yet to be finalised for the Passat but the saloon is expected to be priced at just under £38,000, with the estate coming in at just under £40,000. While it lasts, customers will also be able to obtain the £5,000 plug-in car grant to reduce the transaction price. It will be available to order from October with deliveries from January 2016.

There will be two equipment grades for the Passat GTE in the UK. The standard car comes with adaptive cruise control with autonomous emergency braking, satellite navigation, Bluetooth, parking sensors, LED headlights and a charging cable.

It certainly helps the Passat appeal to a niche of fleets or drivers who really don’t want a diesel, but can choose an alternative with low BIK tax liability. We don’t really know how many of those there are, but at least the options that are smaller than a Mercedes-Benz S-Class or Porsche Panamera are increasing.

Cross traffic alert could prove annoying. It could slam on the V60’s brakes despite being somewhat clear of any danger