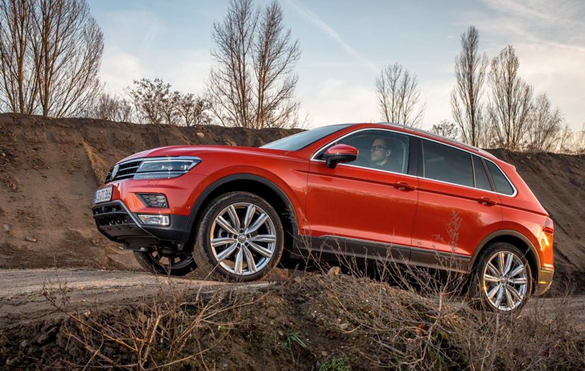 Few people may realise that the Tiguan is Volkswagen’s third most popular car in the UK, with almost 22,000 registered in 2015.

And as the first major new model launch under the brand in Europe since the so-called ‘dieselgate’ crisis, it is more critical to get everything right from the start than it otherwise might have been.

Like several other SUVs and ‘crossovers’ of this size, fleet sales are pretty important, and Volkswagen thinks around half the new Tiguans registered in the UK will be taken by fleet operators. The model also runs ahead of the segment average for four-wheel drive take-up at around 75%, compared with the typical 50%.

The particular part of the SUV sector the Tiguan competes in has grown by almost 200% in the past eight years, and now accounts for almost 300,000 UK sales and more than 11% of the UK new car market, while all SUV and crossover sub-sectors  (of which there are apparently five) combined are expected to make up 28% of the UK market by 2018.

Using the same modular component set as the latest Golf, Touran and Passat, the Tiguan gains new technology as well as a small increase in size and on-road presence.

It isn’t quite as tall as its predecessor, but is longer and wider, and its wheelbase has been lengthened by 77mm, improving interior space.

Luggage volume is also greater than before. The rear seat can slide forward to increase this further without the need for folding the rear seat, although the maximum available with the rear seats folded is 1,655 litres – which would be among the best estate cars you could buy for this money.

Towing capacity has been beefed up, reaching up to 2,500kg – depending on engine and specification – which is unusual in this medium SUV class.

There are new safety features on the Tiguan, with forward monitoring and autonomous emergency braking with pedestrian protection standard across the range.

There’s also an active bonnet, which pops up 50mm if the car comes into contact with pedestrians or cyclists to reduce the risk of serious head injury – assuming the car’s autonomous braking has been caught out and has been unable to stop the car hitting them.

Additional optional features include a range of cameras around the car to provide all-round monitoring for driving off-road or parking manoeuvres, trailer assist, a head-up display and LED headlamps.

The four-wheel drive system is more sophisticated than before, too, helping the car tackle more challenging off-road terrain.

CO2 emissions start at 125g/km for the 150hp diesel with front-wheel drive, and 146g/km or 149g/km for 4Motion and adding DSG auto to four-wheel drive models.

If these figures don’t seem spectacular – after all, many two-wheel drive SUVs of this size have succeeded in falling below 120g/km – perhaps Volkswagen is now extra cautious when it comes to stating CO2 and fuel economy figures.

We didn’t try the Tiguan on a great variety of roads, but on our route, which combined short motorway driving stints and urban traffic, it proved to be comfortable, refined and responsive.

However, we did spend time on a specially created off-road section, which put the car to the test, and demonstrated some of the benefits of the 360º camera features available as an option. Of course, it was unlikely to get stuck in a course created for it, but it certainly showed it was capable of far more than most owners will ever expect.

The interior is spacious and the quality of the materials is up to Volkswagen’s typical standard – which is better than most mainstream rivals.

Around 95% of Tiguans sold in the UK are expected to be diesel (the entry level car and price point will be a 1.4-litre, two-wheel drive petrol), while the DSG auto is expected to have a relatively high take-up of 40%.

The UK range will be badged S, SE, SE Navigation, SEL and R-Line, with the most popular model expected to be the manual 2.0-litre TDI 150 SE 4Motion.