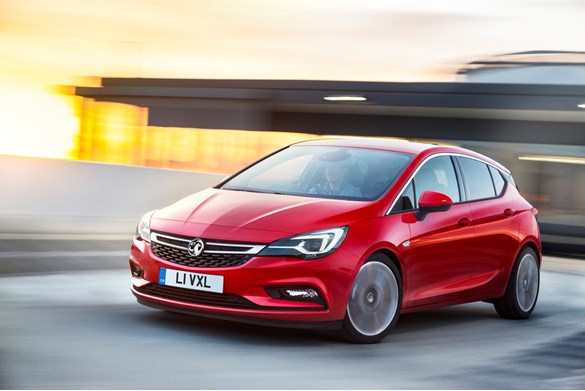 The current Vauxhall Astra has been an underperforming model in the range compared with the Corsa and Insignia.

Launched when parent company General Motors was in Chapter 11 reorganisation, it was also a victim of exchange rate fluctuations, making the British-built model appear uncompetitively priced at times. Vauxhall will be keen to make a fresh start when the new Astra arrives in October.

Once again, Vauxhall’s Ellesmere Port factory will be the lead plant for the hatchback (and the sole producer of the yet-to-be announced Tourer model), as the Astra enters its seventh generation.

In 2015, the outgoing model has been the fifth most popular car in its sector for true fleet sales. Vauxhall will be aiming to put the new car at the top.

The Astra bucks the trend of most new models and is actually smaller than its predecessor, at least on the outside.

It is 49mm shorter, making it 4,370mm long, and its wheelbase is shorter by 23mm. But some interior dimensions have been increased, including rear leg room, while the distance between front and rear hip points is also greater.

Building a slightly smaller car has helped in  the quest to reduce weight. The new Astra is up to 200kg lighter than the outgoing hatchback, and, on average, 130kg less thanks to lighter powertrains, reduced tyre diameter and weight, increased use of lighter, high-strength steel, and less mass in the exhaust and braking systems.

The car’s battery has been removed from the engine bay and placed under the rear seats to improve weight distribution.

OnStar – Vauxhall’s onboard directory and  diagnostic service – makes its debut in the  Astra and is standard on SRi and Elite models, although subscription prices have not yet been confirmed. The European call centre for OnStar is based at Vauxhall HQ in Luton, where staff  can provide assistance. The diagnostic function combines items available in a standard trip computer with oil life and tyre pressure. It  also provides the car with a wi-fi system  capable of connecting several devices.

Vauxhall is targeting a five-star rating in the Euro NCAP crash  tests, and has pre-tensioners on  all seatbelts, a centre rear headrest and a seatbelt reminder on all seats. New technology includes a front camera system (standard only on SRi models), which has traffic sign recognition, forward collision alert, lane keeping assistance and autonomous emergency braking.

The Astra has a simplified range of equipment grades. Vauxhall has deleted the SE, Tech Line GT and BiTurbo lines. The new model will be offered with Design (from £15,295), Tech Line (from £15,995), Energy (from £17,295), SRi (from £17,895) and Elite (from £19,315 on-the-road). Price reductions see Design models cut  by £815, compared to the outgoing model, a £1,290 fall for Tech Line, £2,220  less for SRi and up to £2,935 lower for Elite models. These lower prices,  combined with lower CO2 emissions, will mean lower BIK tax liability. Key  specifications fitted as standard across the range include a new IntelliLink  touchscreen display, Bluetooth and USB connectivity, digital radio, alloy  wheels, LED daytime running lights, front and rear electric windows,  automatic headlights, air conditioning and cruise control. Tech Line models include sat-nav as standard (as before), although there are separate ‘nav’ models for SRi and Elite.

Specification data is for the 1.6 CDTi 5dr Tech Line model.