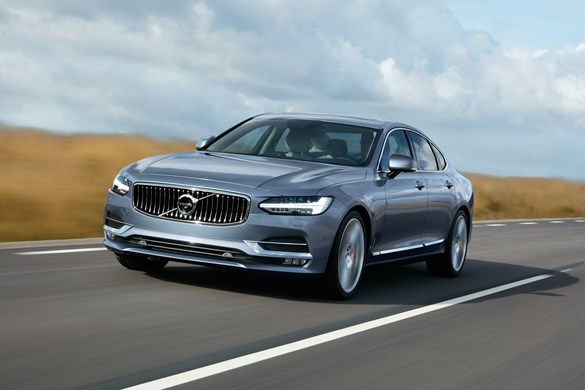 The second new car developed wholly by Volvo since it was sold by Ford in 2010, the S90 premium saloon is being positioned against the BMW 5-Series, Jaguar XF and Audi A6.

The S90 shares a platform with the XC90 SUV launched last year, and makes use of several technologies and design cues debuted on that car.

Order books are likely to open in spring, with first deliveries expected in the summer. 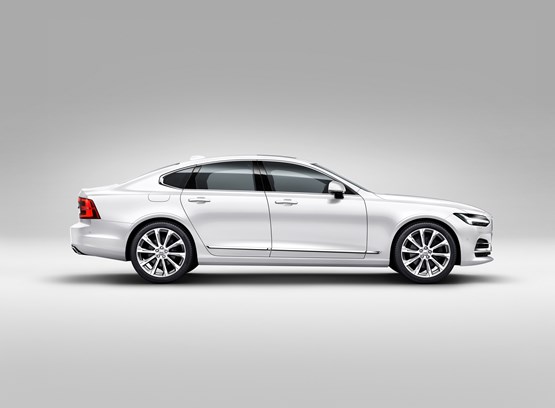 The S90 is a big car – at 4,963mm long, it’s longer by 50-100mm than the XF and 5-Series. Visually, the design is familiar, with the ‘Thor’s Hammer’ LED headlights and nose bearing more than a passing resemblance to the XC90. This saloon sits low and wide, with a number of metallic and pearlescent paint finishes on offer. Three trim levels will be available – Momentum, R-Design and top-spec Inscription. 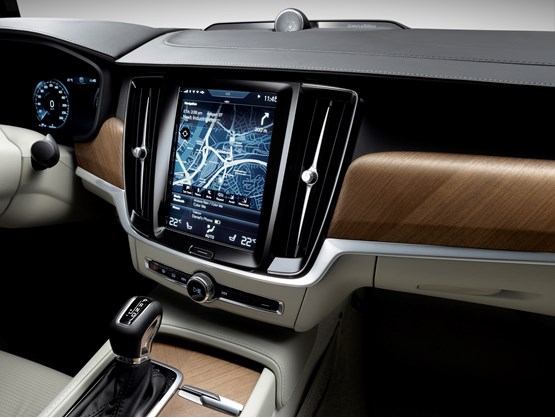 The additional length means excellent rear legroom of 91cm, which Volvo hopes will help the car find favour with chauffeur fleets.  Volvo has achieved this by pushing the front wheels 15cm forward, and the passenger area 25cm back. A 500-litre boot offers plenty of storage. While the seating position is not quite as upright as its big brother, the car inherits style, fit and finish from the XC90. Leather seating is standard, as is the sat-nav.

On the dash, wood, leather and digital dials all make an appearance, along with a large portrait touchscreen.

The big screen means few buttons, leading to a clean and uncluttered dashboard, while the infotainment system is compatible with Apple’s CarPlay and Google’s Android Auto systems for smartphone connection. For music lovers, a high-end stereo system is available from Bowers and Wilkins. 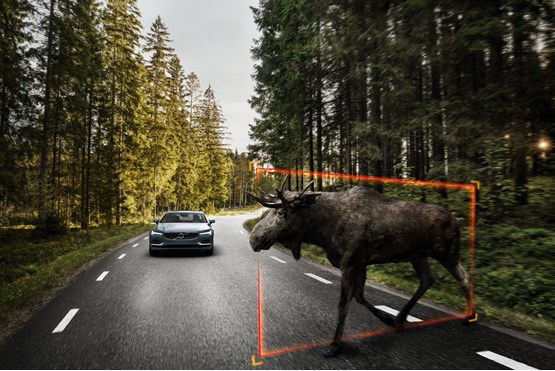 The S90 introduces more safety functionality, with a number of new technologies making a debut.

The second generation of Pilot Assist, first launched in the XC90, offers semi-autonomous driving in low speed traffic jams, as well as adding steering assistance up to 80mph where road markings allow. The driver must, however, remain in full control of the vehicle at all times – the system only currently offers assistance, not total control. A comprehensive range of city braking, medium speed braking, blind spot and lane assist technologies are also included as standard. 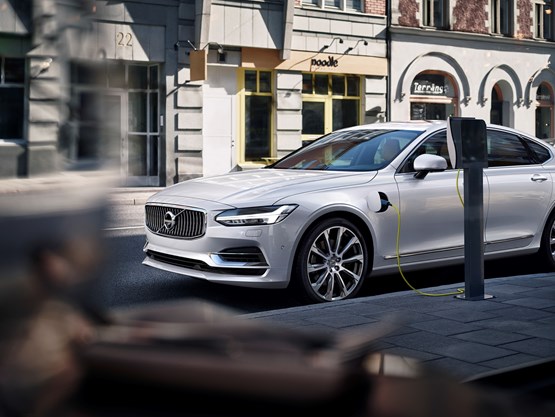 Engines in the S90 come from Volvo’s new universal engine range, made from 2.0-litre, four-cylinder blocks.

A 316hp T6 petrol will be available, although the majority of fleet buyers are likely to opt for D4 or D5 diesels, offering 187hp and 232hp respectively. The D4 offers low CO2 emissions of 109g/km, but these are eclipsed by the T8 ‘twin engine’ plug-in hybrid powerplant already seen in the XC90. Producing 401hp from a petrol engine and electric motor, this combination emits 44g/km CO2, with an estimated fully electric range of 31 miles.

Both six-speed manual and eight-speed automatic transmissions will be available, as well as an all-wheel drive option.