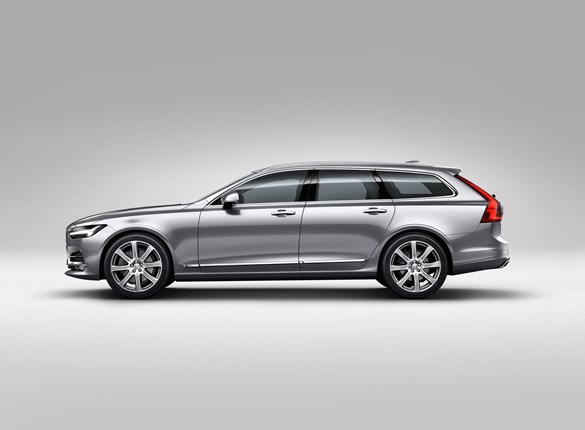 Volvo expects fleet to be the dominant sales channel for its latest big estate, the V90, with an 80/20 fleet-to-retail split.

“Typically, we would expect fleet sales of up to 4,500 units per year, but for the launch year our ambitions are more modest, and the current forecast is around 500 fleet sales,” said Selwyn Cooper, head of business sales at Volvo Car UK.

“This volume is driven by the limited supply available to the UK during the launch phase.”

The V90 estate is priced from £34,555 and is available to order now, with first deliveries expected in October.

The V90 shares the same front end as the XC90 and S90, with each having ‘Thor’s Hammer’ LED headlights. The rear has been titled by 25 degrees compared to the V70, with distinctive taillights, which were first shown on the concept estate at the Geneva Motor Show in 2014. The sloping roofline is more attractive than Volvo estates of old but does mean a slightly smaller bootspace (see interior).

Inside, the V90 is essentially the same as the S90. It has a premium feel with wood across the dash, a digital instrument panel and a large portrait touchscreen.

The V90 is 4,963mm long, meaning plenty of rear legroom (911mm). However, maximum boot space, although generous at 1,526 litres (including underfloor storage), is less than the V70’s 1,600 litres and rivals the BMW 5 Series and Mercedes-Benz E-Class estate.

As you would expect with a Volvo, there is a high level of standard safety equipment, notably the second generation of the manufacturer’s semi-autonomous drive technology Pilot Assist, which was launched on the XC90 and is also standard on the S90. Pilot Assist keeps the vehicle at a set speed or distance from the vehicle in front, braking and accelerating with the flow of traffic. On motorways it adds steering assistance to keep the car within lane markings and can now work at speeds of up to 80mph (compared with 31mph for the XC90), without needing a lead car. Pilot Assist is automatically switched off if the driver does not keep a hand on the steering wheel. Volvo describes the second generation of the technology as “another step towards fully autonomous driving”.

Like the S90, the V90 features a ‘large animal detection’ system as standard. It uses a radar/camera unit to detect animals such as deer or horses standing or moving across the road and warns the driver. If the driver doesn’t respond, the car automatically brakes.

Volvo has also developed two systems to help avoid a run-off road accident and to protect the car’s occupants in the case of an unavoidable road departure. Run-off road mitigation works at speeds of 40-86mph and uses the car’s cameras and sensors to detect the road edge. If the car starts to veer off the road, it applies gentle steering input to guide the car back on course. Run-off road protection, which launched on the XC90, tightens the front seatbelts when it detects it is unavoidable for the car to leave the road. Optional safety features include blind spot monitoring, rear collision warning, cross traffic alert, a parking camera system with a 360-degree view, and Park Assist Pilot, which includes automatic parallel and 90-degree parking.

The V90 is built on Volvo’s Scalable Product Architecture (SPA) platform, with its 2.0-litre four-cylinder ‘DriveE’ powertrain, available with 190hp (D4) or 235hp (D5). A T8 plug-in hybrid is expected to go on sale towards the end of the year as part of Volvo’s new electrification strategy, which sees plug-in hybrids being introduced across its entire range. The SPA platform has been designed with electrification in mind. Pricing has yet to be announced for the T8 Twin Engine powertrain, but Cooper says it will have “best-in-class benefit-in-kind rates, due to its sub-50g/km CO2 rating” and will account for up to 35% of the fleet sales mix. The D4 190hp powertrain, which has CO2 emissions of 119g/km and fuel economy of 62.8mpg, will be the biggest fleet seller, taking around 50% of the mix. The D5 comes with all-wheel drive, which takes CO2 emissions to 129g/km, with a fuel economy figure of 57.6mpg.