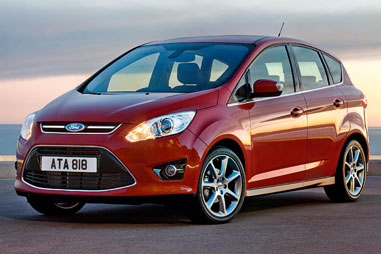 Being late to the party failed to prevent the C-Max from grabbing a substantial share of the retail multi-activity vehicle market.

And another late entry should prove no barrier to the next-generation line-up winning Ford a stake in the burgeoning sector for versatile fleet and family transport.

Despite lagging behind Renault and Citroën in offering a choice of five or seven-seats in the key midsize segment, the company believes its new C-Max can still secure vital corporate registrations as well as extra retail sales.

The popular S-Max, while having seven seats, is closer in size to the Ford Galaxy than C-Max and has a more overtly sporty appeal.

“Multi-activity vehicle models represent a huge share of the French market and there’s no doubt that the Scenic and C4 Picasso have been pacesetters in Britain. But we aim to make an impact with two distinctly different vehicles,” said marketing director Mark Simpson.

Speaking as the cars were launched to the media, he told Fleet News: “Each version has its own virtues but we think the seven-seater is the spiritual successor to the original design and that’s the one that should help us break into the corporate sector.

“Cars with seven seats now account for more than 60% of the market and research shows that a significant number of buyers want the additional flexibility allowed by extra seats when the need arises without stepping up to much bigger vehicles.

“Our response has been to make the Grand C-Max as easy as possible to use with a floor that’s completely flat when the seats are down. We have given it all it needs to appeal to user-choosers.”

According to Simpson, the bigger version should account for 60% of next year’s registrations.

“Our total sales target is relatively modest at 20,000 – we are looking for a strong but realistic market share and there will be no discounts for the sake of volume.

“Ford will not be the cheapest choice in this area. We don’t need to compete with the Koreans, but we are offering a great deal for the money. I believe the content and features of the Grand C-Max represent a car that makes the expensive affordable. A lot of user-choosers are family motorists and we hope our car will be seen as an interesting alternative,” he said.

The first to use Ford’s new global C-sector platform, their performance augurs well for the next Focus.

The cars debut a slick-change six-speed manual gearbox and the latest Ecoboost 1.6-litre petrol engine – a free-revving unit that delivers a lusty output with smoothness and low noise levels.

But the upgraded 1.6-litre TDCi unit is expected to be the most popular choice.

With twin sliding side doors, getting to third row seats is particularly easy in the Grand thanks to a novel arrangement that allows the centre second-row seat to disappear as if by magic.

Both Zetec and Titanium trim levels have more equipment and the premium feel is reinforced on the latter by high-grade audio, auto lights and wipers, hill start assist, tyre deflation detection and cruise control.

Options include a powered tailgate, satellite navigation with a rear view camera and an automated parking system.

Improved economy, lower insurance and stronger residuals are claimed to represent annual savings of up to £800 compared with the outgoing C-Max.

With remarkable agility for cars with relatively bulky bodywork, the new C-Max duo has strong driver appeal as well as impressive practicality.